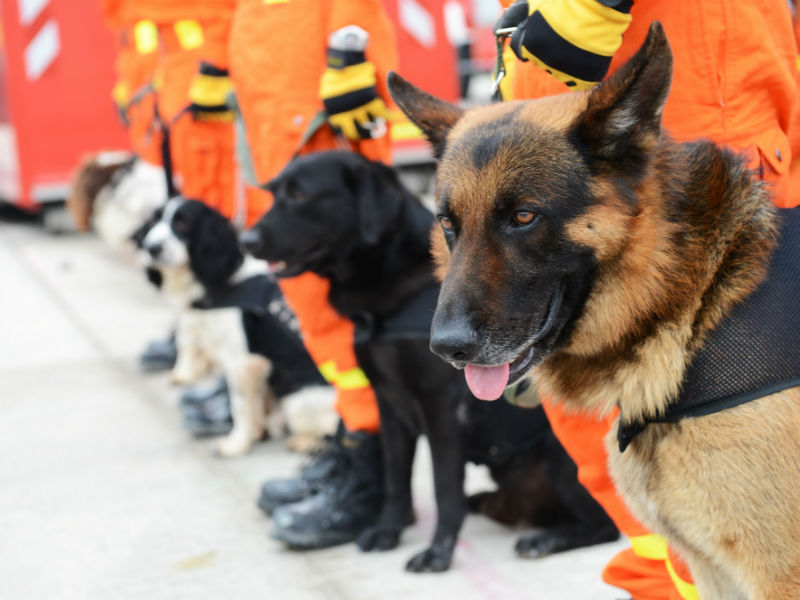 Search and rescue dogs are invaluable in times of crisis, such as after an earthquake or a bombing in a war zone, because nothing man-made can beat the power of their noses. They are literally lifesavers, protecting soldiers in the field and finding survivors after a natural disaster. When they’re working, in order to function at their best, it’s important that these dogs be in top condition.

However, before they can do their job, the dogs have to get to these unsafe situations at a moment’s notice, and previous research has found that travel, both by land and by air, is an added stress. These dogs do critical work in terms of public safety and national security, so it’s important to determine how stress affects their health and performance. Erin Perry, at Southern Illinois University, and other researchers at the University of Illinois, decided to investigate whether helicopter flights cause stress in search and rescue dogs, and if so, if that affects their work performance.

The researchers studied nine Federal Emergency Management Agency (FEMA) dogs. These dogs were all trained search and rescue dogs that had previous experience with flying on helicopters. For the study, the dogs were put on a helicopter for a 30-minute flight, and then completed a standardized search exercise immediately upon landing.

In the search exercise, the dogs had to approach and find a hidden “victim” and then bark repeatedly for 30 seconds without leaving the victim. The dog failed the test if he was unable to locate the victim, didn’t complete the 30 seconds of barking within the allowed two-minute time frame, or failed to stay with the victim once barking had begun. The performance of the dogs on the search exercise was also measured by time to completion.

In addition, researchers measured different indicators of stress on the day before the flight, right before flying, during the flight, and after. These indicators included body temperature, heart rate, fecal samples, and cortisol (a hormone that helps the body manage stress) levels measured with a saliva swab. They also monitored behaviors that are signs of stress, such as shaking, lowered posture, tucked tail, and panting.

The study found that helicopter travel did stress the dogs. Their temperature increased during the flight, as did their cortisol levels. There were also corresponding behavioral indicators of stress in some of the dogs during loading of the helicopter and mid-flight. However, despite these signs of stress, there was no impact on the dogs’ performance during the search exercise. All of the dogs successfully completed the exercise, and none exhibited any stress behaviors while searching.

So, although helicopter travel was a stressful experience for these working dogs, their job performance didn’t suffer at all. They were able to overcome their own emotional response and do what they had been trained to do accurately. Perhaps it’s because search and rescue dogs have been conditioned to work in stressful situations, or maybe they just love what they do, but these impressive canine heroes deserve our respect and admiration for serving us, even in the worst of circumstances.