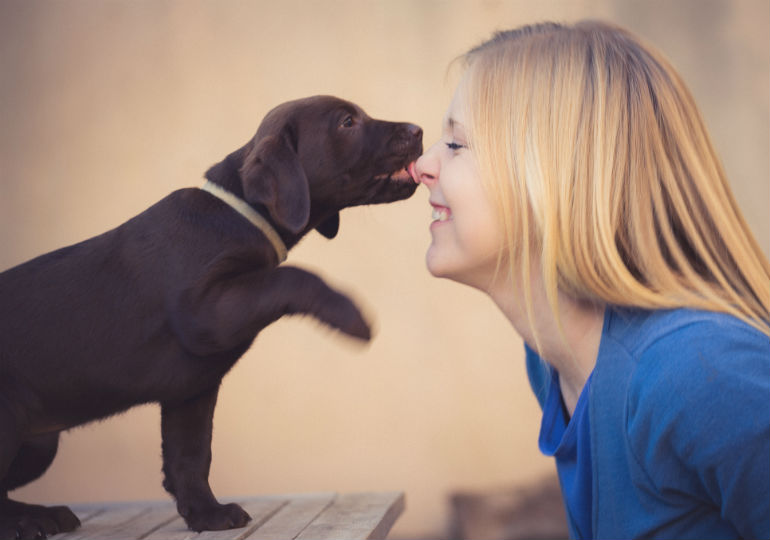 Question: What do you love most about your dog? Chances are your answer is how friendly, trusting, and loving he is. These are characteristics we’ve cherished for thousands of years, ever since our ancestors met the wolves that would later become dogs.

Have you ever asked yourself why dogs are so friendly though? One researcher, by the name of Bridgett M. vonHoldt, from Princeton University, has asked that question, and it’s been the focus of her study for a number of years. She wanted to know if the answer to why dogs are so friendly could be found in their DNA, and what specific genes might be responsible.

Science defines “friendliness” in dogs slightly different than we do, with a term they call “hypersociability.” This refers to behaviors we will all recognize: How dogs look to us for directions or to solve problems, and the amount of time they spend interacting with us. These behaviors are unique to dogs, and dogs alone; other canines, such as wolves, don’t do this.

To find out why, Dr. vonHoldt looked at human DNA for clues. Specifically, she looked to people with a genetic condition known as Williams-Beuren syndrome (WBS). People with WBS have unique personality traits: they are overly friendly, trusting, and outgoing, often to an extreme degree. This is due to a variation of specific genes in their DNA, variations that vonHoldt looked for in the canine genetic code, too.

It turns out there was a similar variation in dogs. Variations in the genes that cause WBS in humans were also found in the most friendly of the dogs. The greater the variations of the genes, the more hypersocial the dogs, while fewer variations were observed in less friendly dogs and in wolves.

This is the first study that paints a clear picture of how wolves might have become the dogs we know and love today.

“It is great to see initial genetic evidence supporting the self-domestication hypothesis or ‘survival of the friendliest,’” evolutionary anthropologist Brian Hare, of Duke University, told “Science News.” While Hare was not involved in this study, he does study how dogs think and learn. “This is another piece of the puzzle, suggesting that humans did not create dogs intentionally, but instead, wolves that were friendliest toward humans were at an evolutionary advantage as our two species began to interact.”

More research is needed to confirm the link between these genes and dog friendliness, and whether certain breeds are friendlier than others. However, this study tells us a lot about our history with dogs — that how we became best friends may be written into our very DNA.