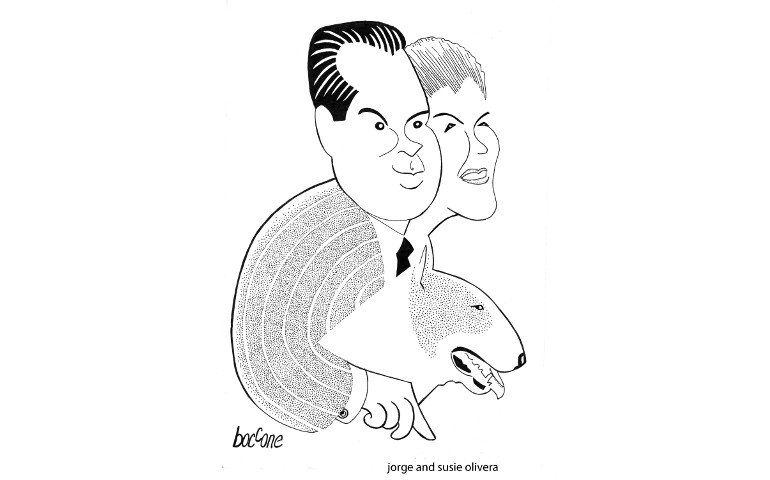 I’m a caricaturist. I draw funny faces. That is, I draw faces funny.

It’s an important distinction. Any decent draftsman can draw a funny face; a caricaturist finds the funny in a nondescript or even beautiful face. And caricaturists who aspire to a certain level of sophistication, those of the “New York School” whose dean was the late Al Hirschfeld, will consider a subject's entire body. A good caricaturist, much like a good actor, knows that the slump of the shoulders or the arch of the back reveals as much personality as the face does.

In 2007 I began drawing “Dog People” for the AKC Gazette, with reprints featured in the “AKC Weekly Wins Gallery.” Before that, I drew show folk for Theater Week magazine and ballplayers for Baseball America. Throw in lots of freelance commissions for other magazines and playbills, and I've published hundreds of caricatures.

Do people mind being turned into cartoon characters? No, not usually. Most are flattered. Among the celebrities I've drawn, the touchiest about their looks were actors. Tony Randall called Theater Week to complain about the eye bags I gave him — and then asked for the original art to hang in his dressing room! An actor's vanity is a mysterious and powerful thing.

At first I was nervous about the “Dog People” drawings. Before then, my subjects were national figures accustomed to seeing their image used in creative ways, both kind and cruel. But how would dog breeders, handlers, and judges react? Happily, they react with unfailing delight and good humor. They get a kick out of seeing themselves reduced to a series of lines, dots, and squiggles. They take their dogs seriously, but not themselves.

And that's the spirit I've adopted. I have fun drawing the people, but take great care with the dogs. The asymmetrical grin of Peter Green, the way Susie Olivera squints into the sun, the wisdom in Dorothy Macdonald's face: These took several attempts to get just right. But usually I lavish more time on the dogs than their people; cartooning the breeds while making them decent specimens is a challenge. I knew that David “Mr. Bull Terrier” Merriam, for instance, would be amused that I gave him Bull Terrier heads for eyeballs — as long as they were good Bull Terrier heads. (The original art now hangs in David's home. Chalk it up to those good heads.)

And therein lies the takeaway: Do as dog people do. Pursue your passion seriously — whatever it is — but always be ready to laugh at yourself along the way.

There's a new “Dog People” drawing in every issue of the AKC Gazette.