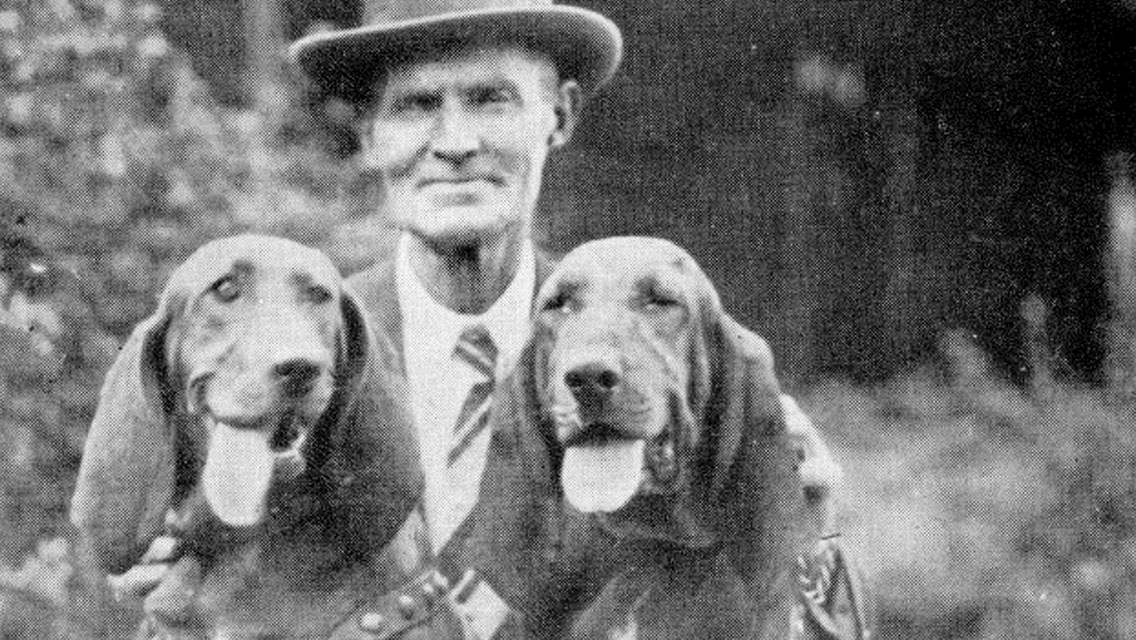 Bloodhounds were brought out to aid in the hunt for the two convicted killers who broke out of Dannemora state prison. For at least a century and a half, the breed has played a major role in law enforcement.

Name a high-profile fugitive, and there’s likely to have been a Bloodhound on his trail.

Perhaps the most famous of these droopy-faced, big-eared scenting sleuths was Nick Carter, a Kentucky hound named for a popular dime-novel detective. He was born in late 1899, and with handler, Captain G.V. Mullikin, he became an American legend for his mantrailing talents. The team was so famous that crowds would come out to watch them work.

Nick is credited with more than 650 finds. In 1903, writes Nona Kilgore Bauer in Bloodhound, evidence gathered by Nick’s nose sent 126 criminals to jail.

He was particularly skilled at tracking cold, or very old, scent trails, and was known for having followed one for 55 miles.

In 1909, Mullikan and Nick were called to the scene of a fire that was strongly suspected of being arson. The problem was the barn had burned down more than 100 hours earlier. It seemed impossible that even Nick would be able to make any sense of the residual odors.

Nose to the ground, the big red dog circled the charred ruins. Then, suddenly, he lifted his tail and was off, leading Mullikin to a farmhouse about a mile away. The man inside grew pale the second he saw the Bloodhound. He had figured that the flames would have would have destroyed any scent evidence and no dog would have been able to find him.

Nick had one more year of active service before his legs gave out. He died shortly after his retirement. Mullikin continued working for two more decades with other Bloodhounds. In his long career he helped to bring 2,500 criminals to justice.

If you have a Bloodhound and would like to play at being Nick Carter and V.G. Mulliken, you can participate in a sport known as mantrailing. AKC recognizes titles earned in this discipline. Another sport tailor made for scent-happy hounds is tracking. Learn more about that here.

Check out these Bloodhound puppies getting a head start on learning life-saving skills.

And the first canine responder to the September 11th attacks.