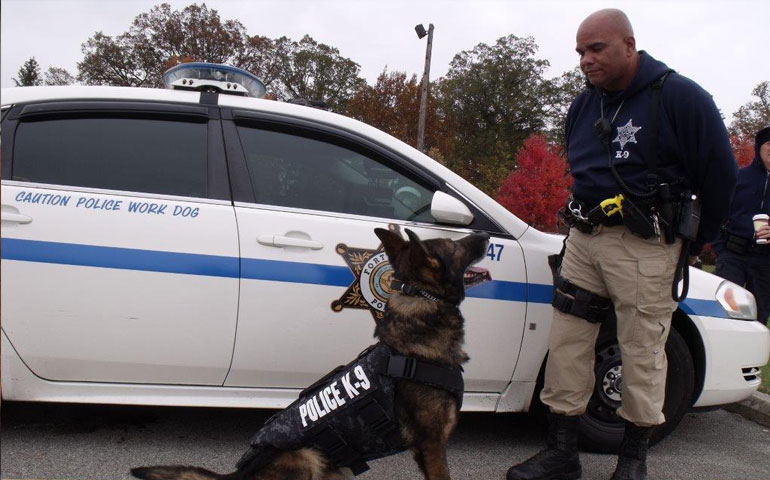 In the summer of 2014, a K-9 cop named Kye, with the Oklahoma City Police Department, was fatally stabbed while apprehending a burglary suspect. The German Shepherd Dog was given a full-honors funeral—Kye’s casket was draped with an American flag and was flanked by two uniformed officers (a photo of his handler Sgt. Ryan Stark leaning over the casket later gained national media attention). It was attended by hundreds, including many Oklahoma K-9 handlers.

Kye’s death was devastating to his handler and the department, but now in his honor, almost a dozen police K-9s are safer.

Ten police dogs with the Fort Wayne Police Department in Indiana were recently given bullet- and stab-proof ballistic vests thanks to a public-funding effort through Groupon. The nonprofit group Vested Interest in K9s managed the program, which ran for two weeks in May and asked for $10 donations toward protective vests for police dogs like Kye. After the campaign raised more than $335,000, the Fort Wayne Police Department was granted $10,500—enough for all 10 K-9 officers on the force to receive a $1,050 vest. More than 300 additional police dogs across the country will also benefit from this fundraiser.

Each vest is embroidered with: “In Memory of K9 Kye, Oklahoma City Police Department.”

See some of the dogs sporting their new vests below:

All photos used with permission by the Fort Wayne Police Department