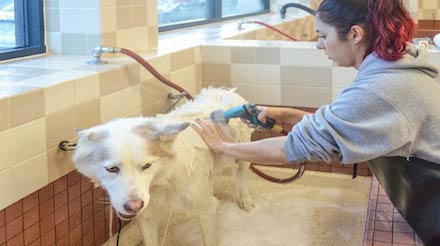 For inmates at the Edmonton Institution for Women, a straight route back into society might be the hair of the dog.

Starting this fall, women at the maximum-security correctional facility in Alberta, Canada, will get the opportunity to use their time behind bars to become certified dog groomers. The 12-week vocational-training program is designed for individuals with little to no knowledge of dog grooming and managed by the Alberta School of Dog Grooming, which boasts a 100 percent employment rate. Graduating students will be certified by Canadian Professional Pet Stylists, the country’s only federally registered body for groomers.

Lyn Cardus, owner of the school, knows firsthand the effect training programs like these can have on individuals convicted of crimes—she worked as a police officer in the UK before coming to Canada in 1997 and taking up a career in dog grooming. “I saw people stuck in a cycle of behavior, but I also saw when these people were given an opportunity [to break the cycle], they embraced it,” she says.

Programs that allow incarcerated individuals to train canines for careers such as service dogs, comfort dogs for veterans with PTSD, and bomb-sniffing dogs are popular in both the United States and Canada because of the dogs’ ability to calm inmates, decrease violence, and increase confidence. The grooming program, Cardus believes, takes that concept to the next level.

“Not only does it have the amazing effect of working with animals, but it also empowers these ladies and gives them an opportunity to come back into society as entrepreneurs in a growing industry,” she says.

In addition to learning techniques relating to grooming, the women will gain social skills that can help them integrate into society.

“They’ll learn respect for themselves because they’ll get it from us,” Cardus explains. “They’ll learn to respect the animals they’re dealing with because if you don’t respect an animal, you can’t work with it. And they’ll gain confidence that they can accomplish something.”

Working with dogs can also be therapeutic in that the dogs don’t care about the women’s criminal past, says Cardus. “Dogs live in the moment—they don’t bring baggage. They only care about who you are the moment you are dealing with them. This may be the first time in their lives these women may have experienced that kind of unconditional respect.”

The program will help dogs as well. The students will be required to work on 100 to 150 dogs before graduating, so Cardus has arranged for partnerships with several local animal rescues whose dogs will receive complimentary grooming, which she explains, can increase their odds of finding new homes. All participating dogs will be vaccinated and given a health exam before entering the facility.

Women who apply the program will be carefully screened, and both school officials and corrections officers will play a role in selecting the four to six students per semester. Individuals who are serving charges of abuse or other violent crimes will not be considered. Also, all equipment, like scissors and razors, will be indexed and returned at the end of each day.

The program is set to begin in the fall of 2016, and the first women accepted will complete the program in early spring 2017. Cardus hopes to graduate 16 to 24 students a year.