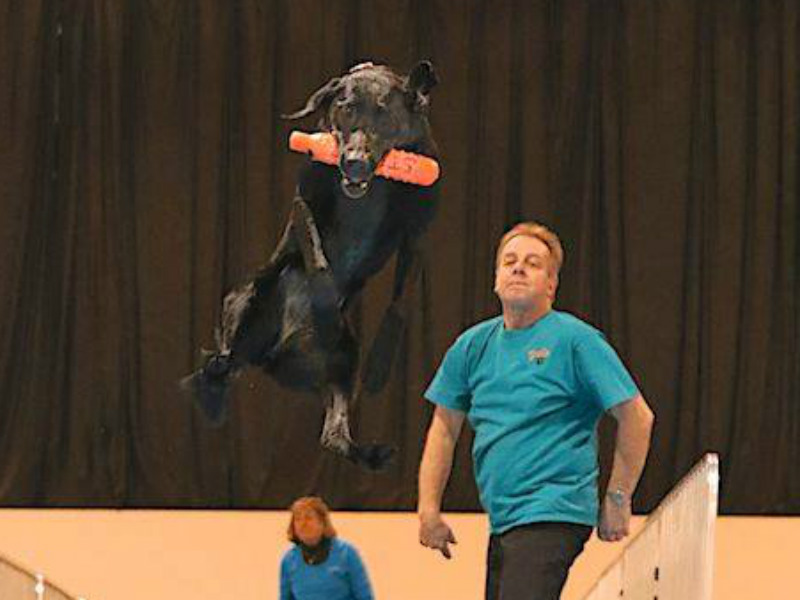 There's so much to see at this year's AKC National Championship Presented by Royal Canin. One of the most thrilling events on display is dock diving, where dogs seem to fly through the air into a body of water. We had the chance to catch up with one of the canines competing this year, Storie, who actually is quite experienced when it comes to this sport—in fact, she even holds a world record! Her owner, J.D. McKnight, explained to us how Storie got her start and what makes her so special.

AKC: So, Storie's pretty famous! She was on the David Letterman show?

J.D. McKnight: She was on the Letterman show in August 2014, she won that event and tied the Letterman’s Diving Dog’s record, that was the last year Letterman did it because he retired. Then last year, she was on the Today show. She’s been on several nationally broadcast events for the Incredible Dog Challenge.

AKC: How far was her record setting jump?

McKnight: Last year at the Eukanuba National Championship for AKC she went 30 feet, seven inches. She’s the reigning champ and record holder, but it’s going to be a tough competition this weekend.

AKC: How did you get her involved in this?

McKnight: Like most other people, my wife saw it on TV. We did it with another dog we had, we had another Lab, who actually had her title, with another titling organization, at 12 years of age. We lost a dog, six years ago, and decided to get another dog, basically to do agility with. We found a breeder somewhat close to us that was breeding field Labs, and went, we had the pick of the litter, and about three weeks of age, we picked Storie out.

She’s taken us all over the country.

AKC: Is she also a good companion?

McKnight: She’s a great companion. I run with her four days a week, weather permitting, we live in Ohio, so we get to experience all four seasons several times a year. She’s great in the house, we have a cat. We’re thinking about getting another dog, just haven’t done it yet, but she’s a great dog overall when she’s here, her focus is the dock and jumping. If we’re playing disc, that’s her focus. She also does agility, obedience, and barn hunt and has titles in all those. She’s a multi-dimensional dog.

AKC: How did Storie break the world record?

McKnight: Actually last year, two dogs broke the record, but she had the record at 30 feet, another mixed breed will be here later went 30 feet 6 inches, Storie went 30 feet 7 inches. She’s number three of all time in the Purina Incredible Dog Challenge, she does stunts. It’s been a lot of fun though, we drove 14.5 hours to come down here to do this.

See Storie's record jump in the video below.