Meet The English Springer Spaniel Who’s Sniffing Out A Superbug 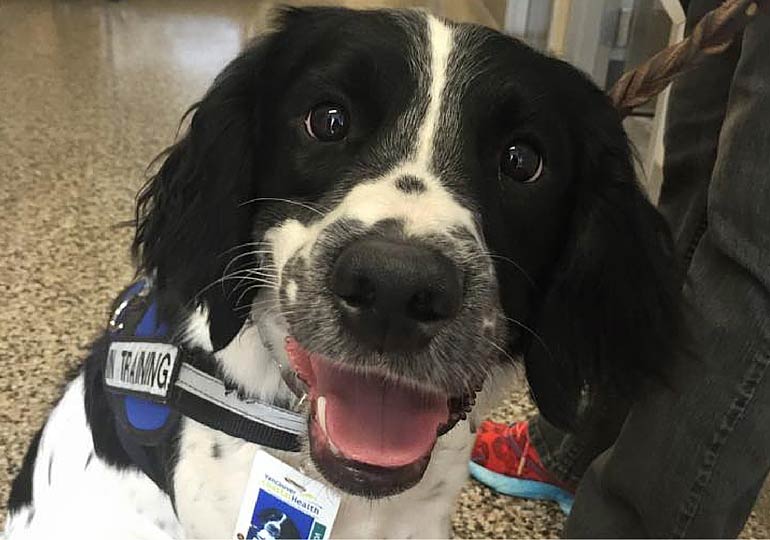 There's no nose like a dog's nose. First there were bomb sniffing dogs, then, electronics detection dogs, and now Angus. Angus is a two-year-old English Springer Spaniel and he is trained to sniff out and detect a superbug, Clostridium difficile (C. difficile).

This superbug, found in hospitals, is a deadly bacteria that causes diarrhea, pseudomembranous colitis, bowel perforation, and sepsis, among other health issues.

Angus, and his handler, Teresa Zurberg, will be working in Vancouver General Hospital. Angus is the first certified dog in Canada to detect this superbug in hospitals, reports CBC.

Angus's training was inspired by a near-death experience Zurberg had herself after contracting C. difficile while being treated for a gash in her leg. According to CBC, Zurberg had prior experience training detection dogs, which led her to the idea to train Angus to detect bacteria.

Angus can detect the particular smell of the C. difficile bacteria and identify contamination much faster than other hospital methods.

And what about Angus' safety? According to the Inquisitir, Zurberg has consulted Angus' veteranrian, who is not worried.

“Angus has proven he’s perfect for this kind of work. He doesn’t have an off switch. He’s persistent, energetic, athletic, independent, and has a huge hunt drive,” Zurberg told the Inquisitir.

Watch Angus demonstrate his unique and unbelievable skill in the video below.

And watch him have a little bit of fun after all his hard work.

Meet the Currency Detector Dog Who Has Made $2.4M For The Canadian Government