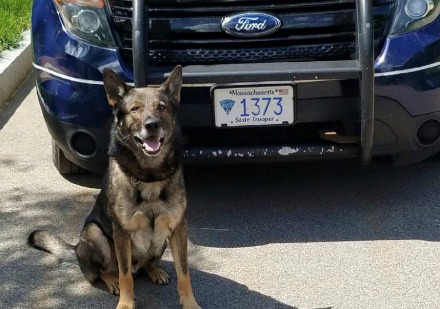 Great successes for the Massachusetts State Police K-9 Unit this week, as two K-9s track down fleeing suspects and another locates a missing boy.

On Monday June 6, a K-9 officer named Rocky was deployed to assist in the search for a missing 11-year-old autistic boy in Hanson, Massachusetts. Rocky searched from yard to yard, eventually leading the police up a hill and alerting at some thick brush, the state police reported.

Paramedics responded and were able to remove the boy from the brush. He was evaluated by the responders and reunited with his family.

The two other K-9s, Viktor and Felix, both tracked down suspects in response to domestic violence calls. Viktor tracked a fleeing suspect in Brookfield using the scent from one of his shoes and altered to his location, upon which, the suspect came out of hiding and surrendered.

Felix located a suspect who had fled on foot and ran into the woods in Freetown. Felix followed the suspects' scent through the woods until the suspected emerged on the trail and surrendered.

Congratulations to these K-9 officers for their hard work and successes!

See an AKC K-9 hero in the video below: