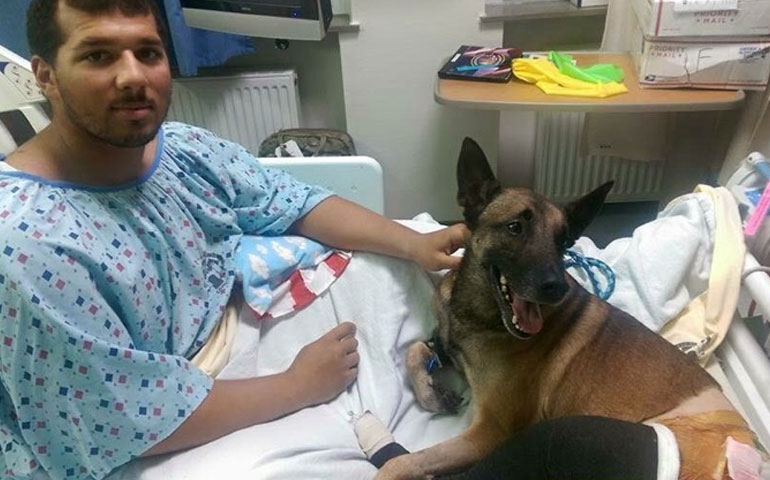 It’s a picture that’s worth a thousand words.

A photo of an injured military working dog recovering in a hospital with a Purple Heart clipped to his collar has gone viral since it was posted to Facebook by the 89th Military Police Brigade on December 9.

The dog, named Rocky, and his handler, 22-year-old Specialist Andrew Brown, were injured by an IED blast while stationed in Afghanistan and were recovering in the same hospital room temporarily. Both were struck with shrapnel, and Rocky’s leg was broken. Two days later, the brigade posted an update on Facebook about their condition:

Brown and Rocky have been serving together for two years, ABC reported, and had been deployed since October. Since this photo was taken, Brown returned to Washington, D.C., and Rocky remained in the German hospital to undergo surgery and recover before returning home.

“He does everything,” Brown told ABC. “I'm just really a guy with a leash.”

Dogs can’t officially be awarded military awards like Purple Hearts, but Sgt. 1st Class Michael Garrett, public affairs officer of the brigade explained, “The Purple Heart in the photo was placed on Rocky as a sign of respect and solidarity between him and Brown during their recovery.”

Brown is confident Rocky will stay strong as he gets well.