Injured Police Dog, Thor, Soon To Be Back on Patrol 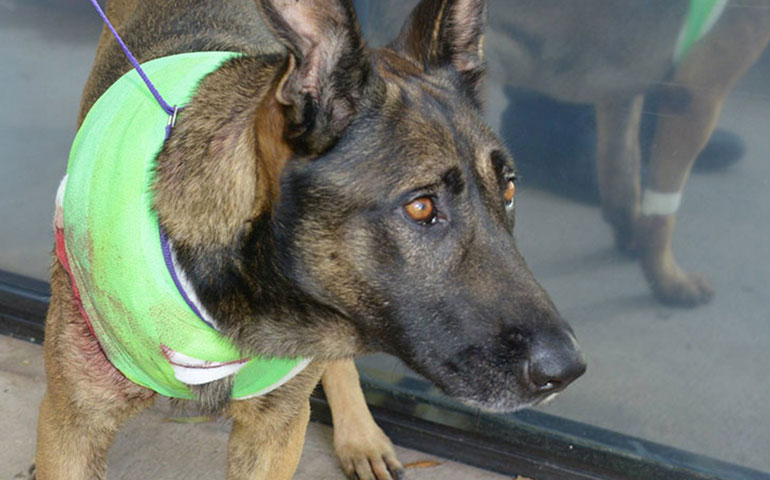 A K-9 officer, critically injured while saving his handler’s life, is on the mend and will soon return to duty.

On Oct. 20, Thor, a Belgian Malinois with the St. Tammany Parish Sheriff's Office in Covington, Louisiana, was stabbed in the neck and shoulder when he jumped between his handler, Ronald Olivier, and a knife-wielding burglary suspect.

Thor underwent emergency surgery. Originally the sheriff’s office were not sure if he would recover, or if he did, be able to return to work. Sympathy and well-wishes poured in from all over the country.

Now, a recent report claims his recovery is going well and he’ll be back on the job soon.

“Right now, he tires out easily. But we expect that he'll be up to speed and back to work in a couple of weeks,” Capt. George Bonnett, a Sheriff's Office spokesman, told The Times-Picayune.

When Thor was released from the veterinarian on Oct.23, the community held a “welcome home” rally in his honor and named Oct. 23, 2015, Deputy Thor Day.

“Deputy Thor has gone above and beyond the call of duty and has performed his duties in an exemplary manner,” Parish President Pat Brister said at the rally.

The suspect who attacked Thor and attempted to attack Olivier was shot and killed by police.

Thor previously made a name for himself in 2014 for catching the so-called Spider Man Burglar, who used rooftops to gain entry to homes. Reports claimed the suspect, John Edward Green, attempted to drown the K-9 after Thor tracked him, but Olivier intervened.