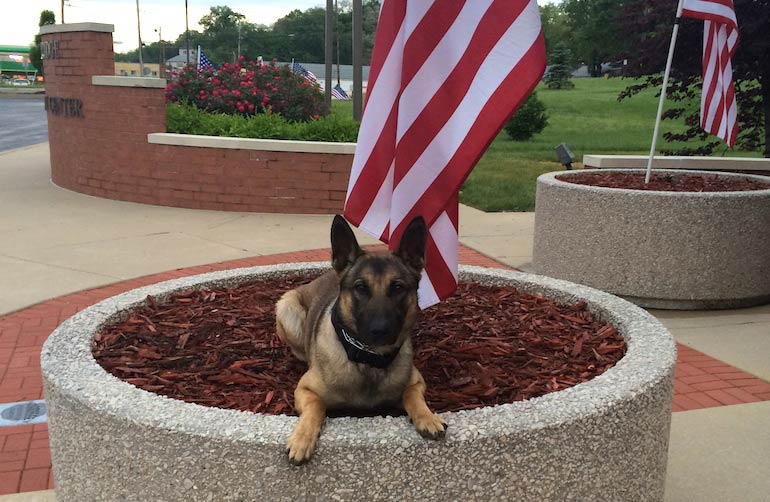 >While in training, Belgian Malinois Jax was taught to respond to commands in both Dutch and German.

Jax was 18 months old at the time and was largely chosen due to his suitable temperament. As we saw with Nikko, correct temperament is a critical characteristic of a successful police dog.

In the breed standard, the American Belgian Malinois Club describes the correct temperament of this member of the Herding Group:

“Correct temperament is essential to the working character of the Belgian Malinois. The breed is confident, exhibiting neither shyness nor aggressiveness in new situations. The dog may be reserved with strangers but is affectionate with his own people. He is naturally protective of his owner’s person and property without being overly aggressive. The Belgian Malinois possesses a strong desire to work and is quick and responsive to commands from his owner.” This describes Jax to a tee.

Jax was teamed up with Officer Mike Morelli, one of the K9 officers in the Alton Police Department. When Jax was 19 months old, together they attended 10 weeks (320 hours) of training at the Illinois State Police facility in Pawnee, just south of Springfield. Jax was trained to respond to commands in Dutch and German so the “bad guys” would not know what the officer is commanding, thus keeping suspects off-balance and fearful.

Jax joined the Alton Police Department as a full-status working member of the team in May 2015. Since he began his role, as of October 2015 he has assisted with at least 10 violent felony arrests, numerous narcotic arrests, tracking suspects, and the identification of illegal drugs.

In May 2015, Jax joined the Alton [Ill.] Police
Department as a full-status working member,
teamed with Officer Mike Morelli.

Jax has a variety of equipment. He wears two collars: a flat collar and an electric collar. There is a tracking harness always at hand and a Kevlar vest at his disposal. However, Officer Morelli tells me that he doesn’t knowingly put Jax in situations where a gunfight is expected or imminent. It’s too risky, and this is a very valuable member of the team. So Jax has not worn the vest to date.

Jax lives with Officer Mike Morelli and his family, and needless to say, he is an excellent watchdog. He is not allowed to run the yard unattended, however. A six-foot fence wouldn’t be enough to stop him from going over it in pursuit of someone or something he deemed “not appropriate” in his personal space. Officer Morelli, therefore, exercises him with frequent walks, where he sometimes incorporates training exercises to keep Jax sharp and interested in his work. Otherwise, off-duty he is a family dog enjoying a game of fetch with his people.

Off duty, Jax lives at home with
Officer Morelli and his family.

Jax remains intact, which is common in the ranks of police dogs. The theory is that an intact male has a bit of a psychological edge, which is necessary for success in the field.

Officer Morelli would be very pleased to see some Jax puppies in the future. Right now, however, Jax must keep his mind on his work and his head in the game—no time for beautiful ladies, as this can be very distracting for a young fellow!

The Edwardsville Illinois Kennel Club was very pleased to have Officer Morelli and Jax attend one of our meetings and to give us a demonstration of their excellent teamwork. It was obvious to everyone watching them together that Jax is well trained and lives to work.

Officer Morelli giving a presentation about his
work with Jax at a meeting of the Edwardsville
Illinois Kennel Club.

Whether our dogs are competing in conformation, obedience, tracking, agility, or the more serious job of policing, they each want to please their partner. That’s what makes them successful in whatever their role may be.

Thank you, Officer Morelli, for all you and Jax do for our community. We are proud of you both. —P.W.

Patricia Weir, of Michaleen Wheatens, is an AKC Breeder of Merit and a member of the Edwardsville Illinois Kennel Club.

The Edwardsville Illinois Kennel Club’s next two-day all-breed dog show is December 5–6, 2015, at the Belle-Clair Fairgrounds in Belleville, Illinois. Admission is free. Visit the club website for more information.