​How to Keep Your Dog Safe During the Eclipse 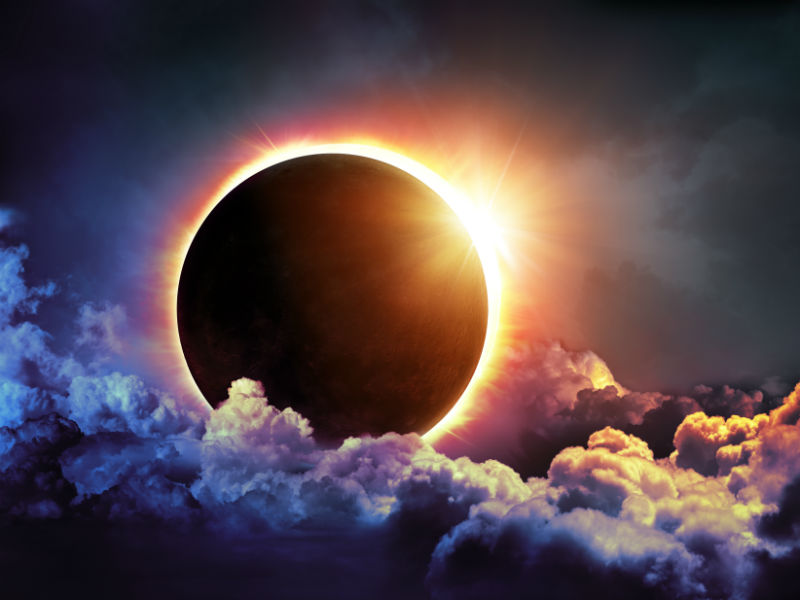 The solar eclipse that will occur on August 21, 2017 is a once-in-a-lifetime event that you can’t miss — literally! While many of us will only see a partial eclipse, people who are the “path of totality” have the chance to see the full solar eclipse. According to NASA, the cities on that path include Charleston, S.C., Cape Girardeau, Mo., Cleveland and Knoxville, Tenn., Cape Girardeau, Mo., and Redmond, Ore.

With such a momentous occasion, you might wonder how your dog is going to react to the eclipse, or if it stress him out to have the sun suddenly disappear. What safety or health concerns should you have about the eclipse?

Will the Eclipse Hurt My Dog?

Scientists have warned people not to look directly at the eclipse without special glasses, but you shouldn’t worry about going out to find canine-sized eyewear for your dog.

That’s because dogs don’t naturally look up or stare at the sun, according to Dr. Jerry Klein, the chief veterinary officer for the AKC. “They know enough not to,” he pointed out, and then adding jokingly, “That’s why they’re smarter than people.”

Most dogs only look up toward sky if something flies overhead or catches their attention, Dr. Klein said. So if the eclipse in your area is large enough to actually darken the sky, your dog shouldn’t be looking up to figure out what’s going on.

Will the Eclipse Stress Out My Dog?

Livestock and wildlife are more attuned to the sun and might react to an eclipse, but your dog probably won’t. If your dog does show anxiety or stress, you shouldn’t worry too much either. “The event only lasts several minutes, so it should manageable,” Dr. Klein said.

There haven’t been too many studies on the effects of eclipses on dogs. The only study published was called “Observations on the Behavior of Animals during the Total Solar Eclipse of August 31, 1932,” and published in the American Academy of Arts & Sciences. Of the dogs reported showing fear or anxiety, the authors couldn’t say if it was because of the actual event or influenced by people themselves.

“Doubtless in some instances, the intelligent animals sensed something unusual in the behavior of their masters, while probably others . . . reacted as if a thunderstorm were imminent and became frightened, whimpered or tried to hide away,” the study said.

What To Do If the Eclipse Stresses Out Your Dog

Keep an eye on your dog and look for any signs of stress or anxiety. The most obvious sign is your dog running off and hiding somewhere, but look for anything more subtle. Other signs of anxiety in dogs include whining, panting, pacing, excessively barking, lip licking, or yawning.

If you do see any of these signs, take steps to help relieve your dog’s stress. That could mean taking him to a quiet room and playing some calming music. You could also try distracting your dog with an impromptu training session with his favorite treats. If you fear your dog may react more strongly, talk to your veterinarian about what he or she would recommend to help.

Thankfully, unlike Fourth of July fireworks or thunderstorms, total solar eclipses are extraordinarily rare. Again, unless you live in the path of totality, you might not even notice it’s happening. If you are in the path however, you and your dog may never see a complete eclipse in your area during either of your lifetimes. Therefore, any stress or anxiety is temporary.

Keep an Eye Out on Other Animals, Too

As mentioned, livestock and wildlife might react to the eclipse. While most reactions will be benign if not amusing — search online for videos of how chickens react to eclipses — keep an eye out for unusual animal behavior just in case. For example, in the 1932 study, the authors noted the reaction of bees near their hives. “As it darkened, the flight quickened and at the time of the greatest totality, the air was full of bees,” they write. “A great roar of wings ensued and the entrances to the hives were blocked with bees trying to get in.”

You or your dog don’t want to be caught in the middle of that!

Unfortunately, even though we may mean well, we’re more likely to accidentally harm or stress out our dogs during an eclipse.

“This is a big occasion,” Dr. Klein said. “We’re going to turn this into natural event into an unnatural event. There’s going to be traveling involved, crowds, parties, fireworks and other such things. It’s those things that are most likely to cause problems for your dog.”

Dr. Klein isn’t wrong. The online magazine Curbed says most people live a day away from the path of totality. Millions of people are expected to travel to see the eclipse, causing, as Curbed writes, “potentially crippling traffic … and resulting in what might be the greatest temporary mass migration of humans to see a natural event in U.S. history.” Many of the cities in the path of totality will host events around the eclipse, like 5k runs or music festivals with beer gardens, according to NationalEclipse.com.

If you plan to travel with your dog for the eclipse, follow this guide on how to keep him safe during the trip. If you are going out of the state, bring along a health certificate from your veterinarian in case you need to seek medical attention for your dog. Once you reach your destination, take additional steps to keep your dog safe.

“As with any event, like Fourth of July, you want to have your dog under control,” Dr. Klein said. “If you can avoid taking your dog to a crowded place, do that. If you can’t, keep your dog on a leash and make sure they feel safe and secure.”

Don’t Force Your Dog to Do This During the Eclipse

As amazing as the eclipse is, your dog will probably not have interest in it, Dr. Klein said. You shouldn’t force him to experience it either.

“Don’t make your dog look at the sun, even with glasses,” Dr. Klein said. “Your dog naturally doesn’t want to look up, and you shouldn’t force him to.”

Dr. Klein also warned about the special glasses themselves. “While it may be a fun photo op to have your dog wear the glasses, don’t let your dog do something bad, like eat them,” he said.

Record What Your Dog Does During the Event for Science!

As mentioned above, there aren’t many studies showing how animals react to eclipses. To help with that, researchers from the California Academy of Sciences are looking for citizen scientists to help out. During the eclipse, you can collect data about the animal behavior through the iNaturalist mobile app from the academy. While the researchers are looking for information about any animal behavior, they’ll also want to know how dogs and other domestic pets. You can learn more about the program here.