Homeless Man and His Dog Get Help in Most Unexpected Way 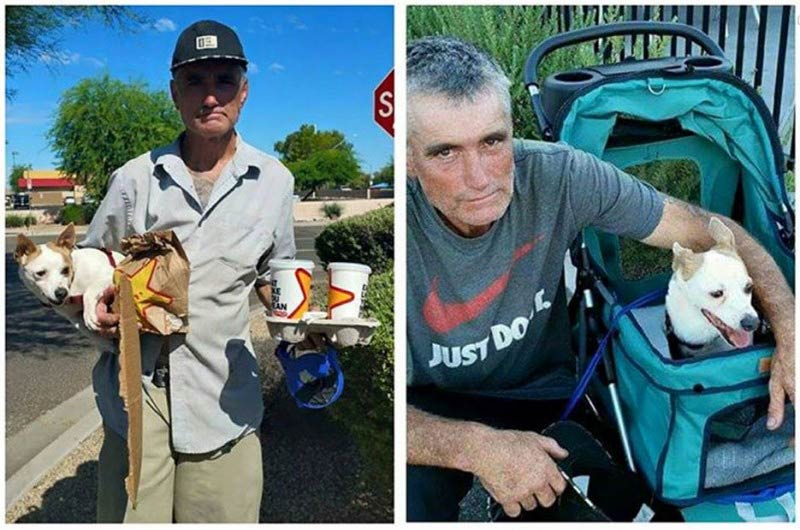 One woman in Arizona is working to help the area’s four-legged homeless citizens. Cheryl King Wade runs Helping Hands for Homeless Hounds, a nonprofit dedicated to providing the pets of homeless individuals with veterinary care, including vaccinations, spay/neuter, and microchipping, as well as getting them licensed. The organization also provides donations like food and supplies to these animals.

This week, one little dog named Roger got a much-needed relief thanks to Wade’s efforts.

The above photo was posted on Facebook, telling the story of a homeless man who carries his dog Roger everywhere he goes to keep him off the hot ground. “The asphalt reaches temperatures of 170 degrees here,” Wade told us. This week, she and her volunteers were able to donate a stroller to the man and his dog so that Roger could ride in comfort. A picture of them together with their new wheels has gained attention on Facebook, with many people curious about this man's story.

“He's from Texas, moved out for a job. The company went under, he lost his job …. Money collected, he buys food and splits it with his dog, if he has enough food, he gets a room at Motel 6 where is able to stay cool and take a shower, him and his dog,” wrote volunteer Tabatha Bunch, who delivered the stroller, on Facebook on July 28.

The man was also given food, water, snacks, goodies, and agreed to have Roger neutered. “Roger will no longer have burnt feet, and his owner won’t have to carry him around all day,” says Wade.

Through Wade’s nonprofit, she has helped almost 600 pets just like Roger. But there are many more she hopes to reach in the near future. “In the Phoenix metro area, there about 53,000 homeless people, and one-third of them have a pet,” she explains.

Wade believes that the vaccinations and spay/neutering will keep the dogs healthy and prevent overpopulation. For individuals with a history of substance abuse, Wade and her volunteers administer the dog’s post-surgery pain medication every day so that the owner isn’t faced with temptation, legal issues, or threats by holding the narcotic substance. “I don’t want to make their lives any worse,” she says.

She also explains that although it can be difficult to help homeless individuals get back on their feet before they are ready to take action, by providing them with a dog license, she’s preventing the local Animal Care and Control from bringing the dogs to a shelter.

“I believe that everyone deserves someone,” Wade says. “For these people, that someone is their dog.”

To make a donation to this organization, click here.