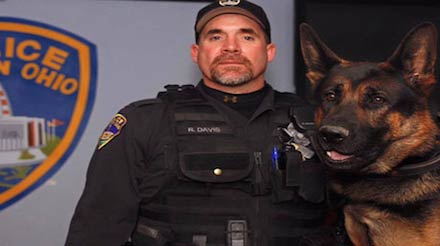 In January, the Canton Police Department laid to rest one of its K-9 officers. Jethro, a three-year-old German Shepherd Dog, was mortally wounded while responding to a burglary.

The department received an outpouring of support from around the country, including more than 2,000 letters sent to Jethro’s handler, Ryan Davis. Officer Davis, who was partnered with Jethro since the dog was a puppy, finally got a chance to read the notes, and he came across one that he found particularly moving.

An 11-year-old girl named Allison wrote a letter expressing her condolences and offering her allowance toward bulletproof vests for the K9 unit. “God bless you and the dogs,” the letter stated.

“How does something like this not rip your heart out?” Davis wrote on Facebook, where he shared the letter.

Because the letter was separated from the envelope, he didn’t know how to reach the child, but when the Facebook page Ohio Going Blue posted the story, several media outlets shared it and, according to Ohio Going Blue, Allison and her mother have been contacted.

See a video of Jethro’s funeral:

To learn more about another K-9 hero, check out Zeke in the video below!