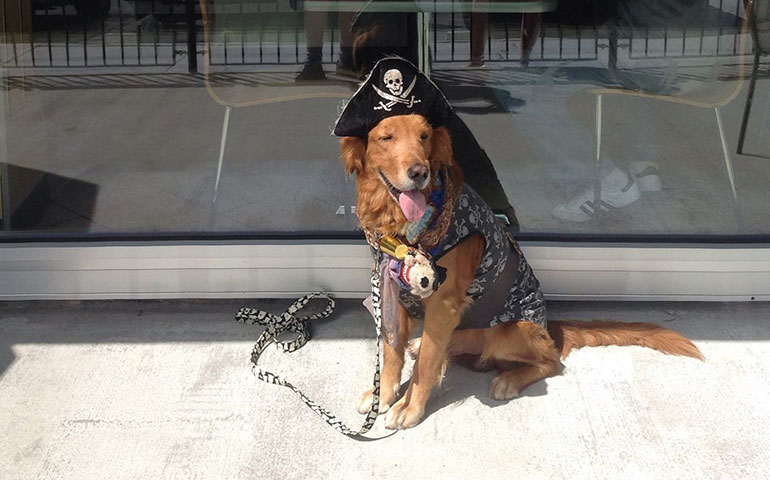 Visitors and residents of Savannah, Georgia, who are hoping to catch a glimpse of something (or someone) otherworldly are getting a little help from a rather intuitive Golden Retriever.

Bailey The Ghost Hunting Dog of Savannah accompanies his owner, Melynda Ware-Loomis, as she leads walking ghost tours of what is considered by some to be the most haunted city in the United States.

Guests on the tour walk from square to square in the historic city, hearing stories of the past—and if they’re lucky, spotting a visitor from beyond the grave by following Bailey's gaze.

Ware-Loomis first brought Bailey home four years ago for what was supposed to be a temporary situation. The then-three-year-old had been abused by his previous owner.

“He was hairless, flea-ridden, had ear and eye infections, and was very fearful, especially of men,” Ware-Loomis explains, adding that she had recently lost both her best friend and her Irish Setter when she agreed to find an animal-welfare group to rehome Bailey. “I was crying my eyes out, and Bailey, who had been abused his whole life, comforted me. I thought ‘what a great dog you are’ and decided to keep him.”

Ware-Loomis, a longtime dog owner who has a background in showing dogs, started bringing Bailey on the ghost tours she leads as a way to help socialize him. The experience not only helped him go on to earn his Canine Good Citizen certification five months later and his Therapy Dogs International title shortly after that, but also revealed that he had a bit of a sixth sense.

“During the tours, he would stop and stare at what seemed like nothing, but when someone took a picture, we would see an orb,” Ware-Loomis says, describing the unexplained flashes of lights that appear on photos and that some say are related to paranormal activity. Bailey began participating in the tours five days a week (weather permitting), meeting with tourists from all over the world.

But you don’t have to believe in spooks to see Bailey in action. He was so well received that a local dog company, Oliver Bentley’s (known for its Ollie B’s Biscuits), asked Ware-Loomis if the pair could do a “Historic Dog Walk Tour” of Savannah, too, which shares some of the history of famous dogs in Savannah and gives a glimpse into the life of current canine celebrities living there, including the University of Georgia's official mascot, Uga, and reveals the many dog-friendly places in the the city. (To schedule a tour or to learn about upcoming dates, visit Oliver Bentley’s website.)

While not working, Bailey gets to romp around with his housemates, two Shih Tzu and a Border Collie puppy, as well as several barn cats, bunnies, a ferret, a billy goat, and other barn animals, and trotting on trails alongside Ware-Loomis as she rides her horse. He’s also participated in a few dog sports, including agility and tracking.

Meanwhile, Melynda’s daughter, Tyler, who also leads ghost tours, is training the puppy to participate in the tours. Will the specialty in ghost hunting trickle down to the puppy as it did from Melynda to Tyler? Only time will tell.