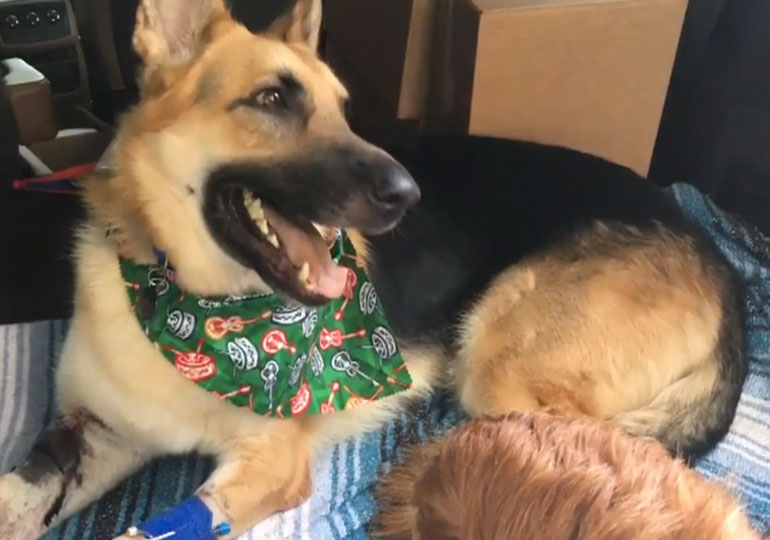 A German Shepherd Dog named Haus is fighting for his life after defending his 7-year-old owner from a snake.

On Wednesday, March 11, Molly DeLuca was in her grandmother’s Tampa backyard with Haus when a venomous eastern diamondback rattlesnake approached them, Fox 13 reported.

Haus positioned himself between Molly and the snake, taking three bites, the DeLucas told local media.

Although Molly was unharmed, Haus suffered kidney damage, ABC reported, and is undergoing treatment at an emergency clinic. A GoFundMe account was set up to cover the expensive veterinary care, which includes four to five vials of antivenin a day, hospitalization, and a possible surgery. As of the writing of this article, it had raised more than $32,000. The page states that excess funds will be donated to local German Shepherd rescue groups.

As of Friday, May 13, Haus’s condition had improved, but according to Donya, he's “not out of the woods.”

“I know to some he is just a dog, but I tell you this dog is so meaningful for our family and so loyal he would protect is with his life,” Donya wrote on her personal Facebook page.

“Breed ambassador loved by all who care for him,” she added.

Donya also urged neighbors to be on the lookout for snakes since this incident occurred in a fenced-in backyard.

Get tips on protecting dogs from snakes here.