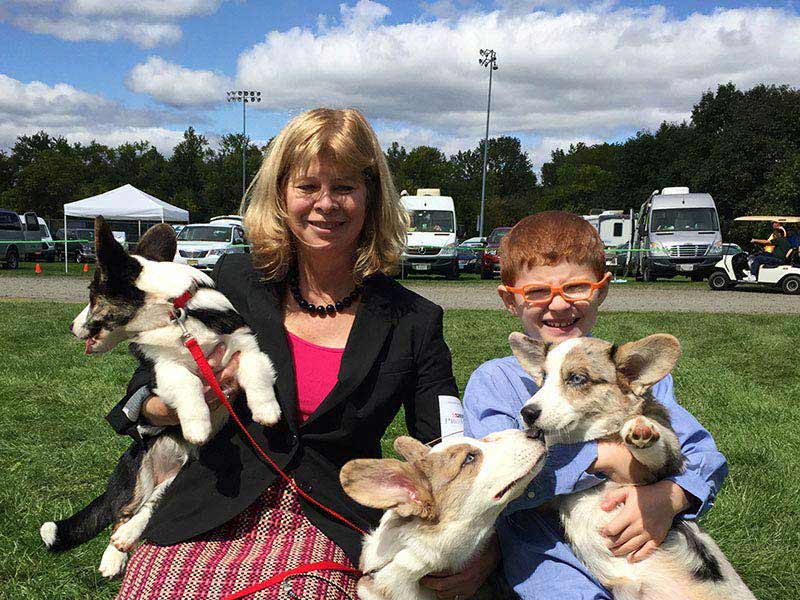 Somewhere above us is a Mount Olympus of dog-show gods—“god” is, after all, “dog” spelled backward—whose favorite form of entertainment is lobbing disappointment and defeat to the leash-clutching mortals below.

Instead of thunderbolts, these diabolical divinities rain down all the vagaries that test the soul of the purebred dog fancier: That once-in-a-lifetime sire that fails a crucial health screening. The world-beating special that comes up lame the morning of the Garden. And the breeding using irreplaceable frozen semen that results in a singleton pet puppy with a helluva overbite—via expensive C-section, of course.

Yet despite the setbacks, we return, over and over. That’s because, somewhere along the way, we tasted a reward so sweet, its memory sustains us, even through the toughest of times. Sometimes, it’s just the sight of a dog so beautiful that we become smitten. Other times, it’s meeting a mentor whose passion ignites our own. And oftentimes, it’s a win, however minor, delivered inside those white accordion gates. That ten-cent slip of silk ribbon has magical powers that rival Jason’s fleece or Hermes’ winged sandals.

And now, the American Kennel Club (AKC) has a new event designed to create those kinds of memories in the youngest among us: the non-competitive Pee Wee class, in which children ages five-to-nine present their dogs to a real judge, using the very same patterns and procedures as those in a “regular” dog show.

Anticipating those thunderbolts from on high, the Pee Wee rules have a number of provisions designed to ensure the safety of everyone involved: Only one child and dog are permitted in the ring at a time, and both must be accompanied by a responsible adult, who must also maintain control of the dog outside the ring. If a dog gets a little too happy, the club provides a leash that can be clipped onto his collar, so the adult can walk him, along with the child.

This September, Theo Bernstein of Manhattan found himself waiting ringside at the Somerset Hills Kennel Club Dog Show in Bridgewater, N.J. The eight-year-old had handpicked his tie and dress shirt to match the blue merle Cardigan Welsh Corgi at his feet.

But even as recently as a couple of months ago, a dog show would have been the last place Theo envisioned himself. When he was born, his family had an elderly Pembroke Welsh Corgi that his mother, Daphna Straus, had competed with in obedience. But after Zabar passed away, Theo and his now-11-year-old sister, Alexandra, grew up dogless, unaccustomed to puppy zoomies in their city apartment.

Last year, Straus went looking for another puppy and found, nearby, Angela Reilly of the aptly named Cosmopolitan Corgis—her kennel is based in her two-bedroom Manhattan apartment. Reilly’s Cardigan bitch, Sallie Mae, was expecting, and Straus reserved a puppy. But Theo wasn’t quite so sure.

“We would visit every so often when the puppies were small, and my kids were a little afraid,” remembers Straus, who is vice president of business development at the AKC. “The puppies were tiny, but the kids were so inexperienced that Theo didn’t even want to hold one.”

But puppies have a way of melting your apprehension, and now Theo was at Somerset Hills, ready for his ring debut. He had the choice of three Corgis to take into the Pee Wee class: His own 4½-month-old puppy, “Maisy” (Cosmopolitan You May Be Right), her brother “C.J.” (Cosmopolitan And So It Goes), and their dam, the aforementioned Sallie Mae—formally known as GCh. All Trade Gone Cosmopolitan. Wisely, Theo opted to go with the seasoned choice on all counts: Sallie would be his dog, and Reilly would be his adult.

Before they went into the ring, Theo practiced with Reilly, learning how to put the show lead on properly, so it hung around Sallie’s neck like a backward “P” when she stood in place at his left side. He practiced gaiting the Corgi and learned how to get her attention by flourishing her favorite salmon treats.

“Sallie did really well with walking around the pen. She walked like she did it a lot of times before,” Theo says, thinking back to their ring debut. (Technically, it’s a ring and not a pen, but he’ll learn the lingo soon enough.) “And she did well standing on the table,” where she was examined by the judge.

Was Theo worried that she might leap off? “Not really,” he says, perhaps recalling Reilly’s steadying hand. “A lot of people would laugh if she did that.”

And he admits to a touch of stage fright himself. “I was worried about all the people who were watching and that I wouldn’t do that well,” he explains. “But I think I did, because everyone got a lot of applause. Sallie made the crowd and me happy. And the ribbon made me happy.”

Straus confirms that Theo left the ring beaming, and the experience fueled his enthusiasm: He watched the 4-to-6-month puppy competition, where Reilly was showing his puppy’s littermate, C.J. And he was thrilled to find out that the dog that won Best of Breed the next day was their sire.

Theo has been an ardent baseball fan—keeping track of his teams’ wins and losses, and he’s now also taken to following the successes of Sallie’s family—remembering which dog earned what placement. “Now he’s completely engrossed in dog-show stats,” Straus says. “He’ll ask, ‘How many Best in Shows does that dog have?’”

Theo decided not to remove his Pee Wee rosette from its clear plastic wrapper—“I didn’t want it to get ruined,” he explains. He’s thinking he’ll display it alongside Zabar’s many obedience ribbons.

“When you’re nine, you get to you go in by yourself,” Theo muses, referring to Junior Showmanship competition. “I’ve got about eight months.”

And he’s got a good mentor in the wings. “I’ll do whatever I can to ‘feed’ his dog habit,” Reilly says, adding that she plans to take him to handling classes when his schoolwork and bedtime allow, and will ask him to help groom the puppies as she prepares them for their first shows. “His enthusiasm is contagious, and I want to do what I can to encourage his new dog-show passion.”

“It added an element of joy, little kids experiencing this for the first time,” Straus says. “And not just for the kids—it’s for everybody.”

For jaded dog-show exhibitors, stopping to clap at the Pee Wee ring in-between grooming, pottying, and showing their own dogs is an opportunity to remember how they first started in the sport—with anticipation and uncertainty in equal measure. After all, everyone was a beginner once.

And if the dog-show gods deign to look down, chances are they’re grinning under their flowing white beards.