Family Of Marine Killed In Afghanistan Gets His War Dog 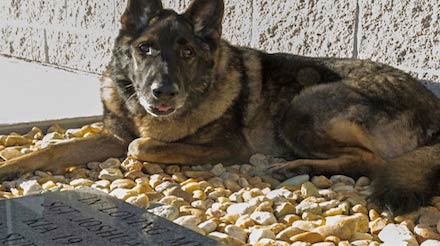 On July 19, 2012, at only 23 years old, Marine Joshua Ashley was killed by an IED blast while serving in Afghanistan. His beloved war dog, a German Shepherd named Sirius, was with him. Sirius survived the explosion.

This year, Sirius was retired, and Ashley’s family was given the chance to offer him a permanent home in Rancho Cucamonga, California.

Ashley’s mother, Tammie Ashley, recalls the last conversation she had with her son, during which he asked her to keep Sirius until he was finished serving.

After Ashley’s death, Tammy said she had the option to take the 4-year-old dog immediately, the Daily Bulletin reported, but she opted to let him continue to serve. Unfortunately, Sirius suffered from PTSD and was unable to bond with another handler. He deployed only one more time, and a year and a half after returning, he was finally handed over to Tammie, her husband, and their two sons, Jordan and Jon.

On February 26, the Marines Corps held a “passing of the leash” ceremony at Camp Lejeune, North Carolina, and in a formal procession on February 27, the Rancho Cucamonga Police Department escorted the Ashley family and Sirius from the airport to their home.

“It’s like getting a little piece of my brother back home. So, it’s really nice having him around,” Jordan told CBS LA (scroll down for video).

“As a gold star family, losing a loved one overseas in combat is a pretty tragic event and it has been several years now that they have continued to deal with that loss,” Lt. Col. David Hyman said in a press release. “Bringing Sirius back to them is almost like bringing back Sgt. Ashley.”

Tammy agrees that Sirius is part of the family: “I just know Josh is watching over us and saying ‘Thank you, mom.’”

Learn about the recently passed law that makes reunions like this possible.