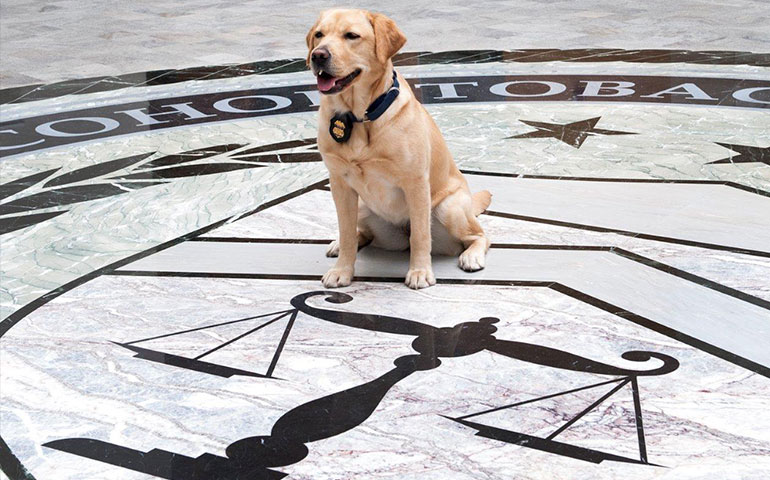 Terrorist attacks around the world have showed the need for security to focus on the threat of homemade explosives and concealed firearms used in many lone-wolf plots.

On the forefront of that process are the sharp-nosed dogs of the Bureau of Alcohol, Tobacco, Firearms, and Explosives (ATF), within the Department of Justice.

Take, for example, Kara, a 2½ -year-old dog who as a puppy flunked out of a medical-alert training program because she was too active. Now she’s found her niche working in New York City and the surrounding area canvassing for explosives and weapons. A typical day might be scanning the Brooklyn Courthouse, where many high-profile terrorism cases are tried, as well as large stadiums and areas of the city where public figures, like Supreme Court Justices, visit.

Kara—and all ATF explosive-detection dogs—is trained to locate as many as 19,000 different scents, which include smokeless power in firearms and shell casings as well as chemicals used in both traditional explosives and homemade explosives (HMEs), like the ones employed by Dzhokhar and Tamerian Tsamaev at the Boston Marathon in 2013.

And she and her canine colleagues stay current with the ever-changing trends in terrorist crimes. Each year, she completes the National Odor Recognition Test, which requires dogs to sniff out various chemicals hidden in odorless cans. Also, trainers are present to imprint dogs with new substances intelligence has determined is being sought out by criminals.

“We try to stay a few steps ahead of the bad guy,” says John Ryan, ATF’s National Canine Division Chief. “We work with our intelligence community and provide classroom training by our chemists so that we can determine what the latest explosive trends are and imprint the dogs with those scents.”

Many of the dogs with ATF are, like Kara, dropouts of other working-dog programs, like the Guide Dog Foundation for the Blind and Puppies Behind Bars, usually because of excess energy that makes them a poor fit for a service-dog role. “They’re intelligent and hearty dogs that have a high food drive, so they do really well in our program,” says Shawn Crawford, the lead instructor at ATF’s National Canine Training Center in Virginia.

“We found that by letting the dogs explore their instincts to run after a scent, they really shine,” Crawford says. The S.E.E.K. training process takes about 13 weeks, following the 12-week program all ATF dogs complete.

But Kara’s training doesn’t stop at graduation. In addition to learning new scents on a regular basis, she undergoes practice sessions with her handler, special agent Stephanie D’Andrea, daily.

“She doesn’t eat out of a food bowl,” D’Andrea says. “She earns her food by working for rewards.”

D’Andrea strives to be creative in finding new places and scenarios for Kara to train.

“Unfortunately, bad things happen all over the place, so we can do training almost anywhere,” she says, adding that she has conducted sessions in movie theaters, office buildings, playgrounds, and schools, to name a few.

But no matter where it’s happening, the most important aspect is that Kara is having fun.

“It’s like a game to her—it’s like she’s playing hide-and-seek,” D’Andrea says. “She doesn’t understand that it’s work or that it’s potentially dangerous; she is just completing her mission and being rewarded with food.”

And of course, while not working or training, Kara gets to be just an ordinary dog, handing out in Long Island with her canine housemate, Oreo.

“When she’s working, she’s very focused and not interested in meeting people, but when she’s not working, she turns into ‘wiggle butt’ whenever she sees someone,” D’Andrea says. “She’s super playful and loves being in the water.”

No one, not even D’Andrea, knows where work will take them next. But no matter where it is, she’s confident Kara will shine.

“The sky is the limit for how we can deploy these dogs,” she says. “Every day is new adventure.”