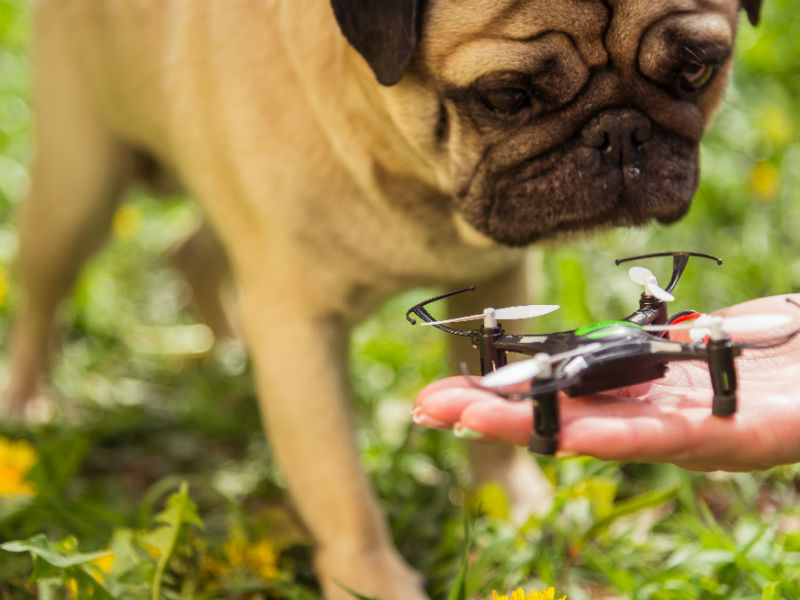 Dog owners want the best for their furry best friend and in recent years, businesses have capitalized on the money people are willing to spend. According to the American Pet Products Association (APPA), Americans spent 66.75 billion dollars in 2016 alone. That's a solid chunk of change.

With the 21st-century tech surge, tech companies have expanded into the pet space, offering products such as GSP collars, automatic feeders, automatic ball launchers, dog “nanny cams,” and more. There's no doubt we want to do everything we can to give our dogs the best lives, but is there a limit when it comes to pet tech?

We're wondering just that hearing about U.K. company Drones Direct, which advertised “Proflight Walkies Dog Drones” — AKA a drone to walk your dog. The advertisement used the tagline “give the dog a drone,” and mentioned features such as a built-in retractable leash, hands-free piloting, and collision avoidance technology.”

If you're thinking that this product sounds a little crazy, you're not the only one. USA Today reports the page has been taken down from Drones Direct website, leaving consumers to wonder if the whole page was just an elaborate PR stunt.

And yet, this isn't the first time using drones to walk your dog has surfaced in the public consciousness. In 2014, a video went viral of a man supposedly “walking his dog with a drone.”

For a professional perspective, we asked program manager of the AKC GoodDog! Helpline, Penny Leigh, what she thought of this dog walking drone idea.

“While certainly a fascinating concept, using a drone to walk your dog is not responsible and could be downright dangerous,” she says. “We encourage owners to take their dogs on walks themselves. Walking together increases the owner-dog bond and provides exercise for both human and canine, as well as socialization and training opportunities.”

There are numerous products that we love because they make our lives as dog owners easier, but as Penny Leigh said, these things don't erase the responsibility involved in dog ownership. Owning a dog means feeding him, picking up after him, and walking him. You might take him to doggy daycare or have a dog walker to help you out, but the idea of a drone dog walker is definitely more of an issue than an aid.

What do you think of this idea? Let us know on Facebook!