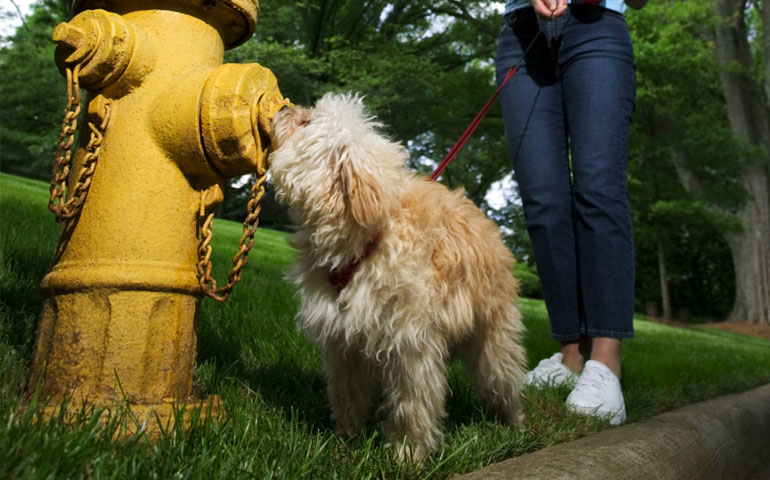 You’re on a walk with your dog and pass by a puddle left behind by another dog. Your dog halts abruptly, turns toward the puddle, and takes a long whiff. He persists at sniffing the spot until you are able to regain his attention and continue on your way. Is this common scenario a gross habit or possible proof that dogs may be more emotionally sophisticated than we think? At least one scientist thinks the latter.

Roberto Cazzolla Gatti, a researcher at Tomsk State University in Russia recently published a paper claiming that dogs’ habit of sniffing other dogs’ urine may be a signal that they are self-aware and therefore able to empathize.

For his study, the findings of which he published in Ethology, Ecology & Evolution, Gatti used what he dubbed the “sniff test of self-recognition (STSR).”

Four stray dogs were examined during the STSR, which took place four times a year. At each test, the dogs were presented with five containers—four holding a urine sample from each dog and one blank sample containing an odorless material. The dogs were given five minutes to inspect the containers.

“All dogs devoted more time to smell the urine samples of the others rather than their own,” a press release by the university stated, “and this behavior confirmed the hypothesis that dogs seem to know their own smell exactly, they are less interested in their own, and they are therefore self-aware.”

The study also found that the older dogs spent more time sniffing the other dogs’ urine samples than the younger dogs in the study, which, the press release explained, “strongly supports the idea that self-awareness increases with age.”

Previously, scientists have studied the possibility of self-awareness in dogs (as well as other species, including human children, dolphins, and gorillas) with the so-called “mirror test.” During this test, subjects were marked with a visual distraction, like a red dot, and placed in front of a mirror. Researchers observed the subjects to determine if they can recognize themselves in the mirror and if they touch the mark on themselves after seeing it on their reflection. Almost all species—other than humans, some great apes, some dolphins, and a couple of other species—failed the test.

Gatti believes his test is more closely aligned with a dog’s perspective.

“Because dogs are much less sensitive to visual stimuli with respect to what, for example, humans and many apes are, it is likely that the failure of this and of other species in the mirror test is mainly due to the sensory modality chosen by the investigator to test the self-awareness and not, necessarily, to the absence of this latter,” Gatti said.

Ethology researchers believe if one is able to differentiate between himself and others, it can be inferred that person or animal can also feel empathy toward others. If Gatti’s study is to be believed, the response of the dogs during the STSR would indicate that dogs have the ability of self-recognition and thereby also likely have the ability to empathize.

So the next time your dog stops to sniff the urine of another dog, give him a moment to examine it. It may be honing his capacity to comfort you when you need it most.

Ever wonder how a dog's nose works differently from ours? Check out this animated video: