This Stray Dog is Too Fat to Walk, and the Reason Why Will Shock You 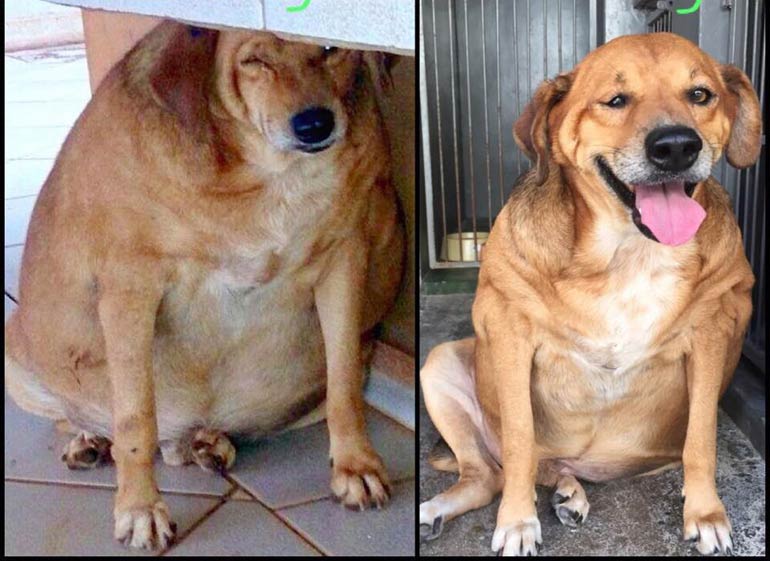 We all know the cliché of the starving stray, wandering around the streets raiding the trash and begging for scraps.

A Brazilian homeless dog named Bolinha (one English translation means “ball”) has turned that image on its ear by becoming so fat that he could barely waddle. It all started about 13 years ago when he was a homeless puppy living in a pile of garbage behind a diner, giving sad eyes to passersby in hopes for a morsel of sustenance.

So skilled was Bolinha at the sad-eye routine that no one could resist. People kept tossing food at him.

He ballooned into a mountain of mutt, over 80 pounds and so round that it looked like it would have been easier for him to roll than to walk.

A private animal rescue group, the Organization to Protect Animals, spotted him and decided to save the dog from all the kind strangers who couldn’t say no.

In the fall OPA-MT took Bolinha from his roadside home, gave him a bath, and put him on a strict diet-and-exercise regimen that included walks on a water treadmill. This device allows overweight or disabled dogs to exercise without risking injury to their limbs because the water’s buoyancy supports and cushions their joints.

In less than a year, according to a post in The Dodo, the dog has dropped around 30 pounds. He still has at least 15 to go before he reaches a normal weight.

This is not the first time a stray's brilliant technique at mooching food became a hazard to his health. In the 1970s, a chowhound in Troy, New York, became so popular with the citizens of the town that he needed emergency medical care to save his life. The Associated Press reported that he was named Broadway Joe, because of his daily routine of ambling down Troy’s main street giving the sad eye to shopkeepers along the way. This went on until the day one of his fans found him sprawled out on the ground, in misery, and rushed him to a veterinary hospital. Turned out he was suffering from too much rich, fatty food. Troy residents set up a medical fund for him to pay for his hospital stay, and he was soon back on the street, but not getting the same number of treats as before.

Roly poly puppies are cute, and many people find fat dogs endearing, but staying lean can mean a longer, more comfortable life. Canine obesity is a widespread problem, affecting up to half of all dogs in the United States. Three ways you can prevent the problem include:

Your puppy's lifelong health and happiness begins with you. Get it right from the start. This e-book provides valuable information on how good and sound nutrition habits will set your puppy on the right path.