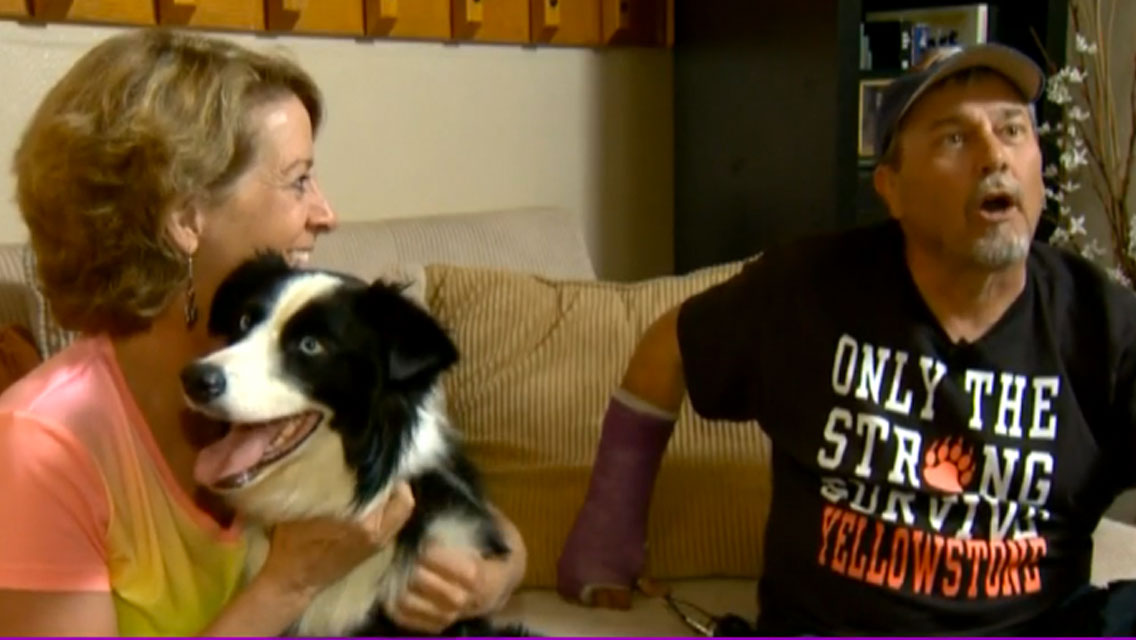 An Australian Shepherd who became lost after a car accident in Yellowstone National Park and lived in the wild for 44 days is finally home with her family.

On July 23, Dave Sowers and his girlfriend, Laura Gillice, were involved in a serious head-on car crash while visiting the park. Sowers' dog, Jade, whose plastic crate was broken during the crash, bolted from the scene, away from park rangers. Gillice's dog, an Australian Shepherd named Laila, was also in a crate in the car but did not escape. For the next six weeks, the couple continuously made the 550-mile trip from Denver to search for Jade, using flyers and social media to get the word out. The community participated, too, reporting sightings, conducting search parties, playing Sowers' voice over a cell phone, and setting live traps. Gillice, an agility trainer, walked through the park with Laila, cuing her to bark for treats in hope that the dog would attract Jade to them.

On September 4, Gillice spotted a dog in a meadow in the park. She commanded Laila to bark, the Facebook page explains, and Jade ran up to them. Although much skinnier, she was not injured. Since then, Gillice and Sowers have been posting updates on the Facebook page, called Bring Jade Home, including a photo of steak that Jade got to feast on and advice to pet owners about traveling with a dog. “PLEASE crate your dogs while traveling, even if it is in a soft crate. I am sure both dogs would have sustained worse injuries if they had been loose,” the page reads.

Although they are enjoying the attention Jade is getting from all over the country, Sowers and Gillice are just happy their beloved dog is home again.

“My life’s been on hold since July 23,” says Sowers in a news report (scroll down to watch). “Finally, I can go back to a normal life again now that she’s back.”