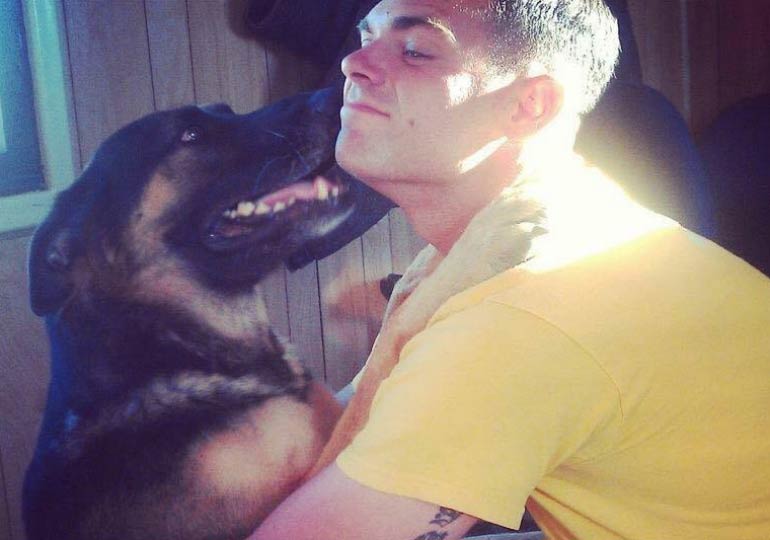 On this Veterans Day, we want to say thank you to everyone who has served and fought for our country, human and canine.

Jeremy Angenend, an Afghanistan veteran, shared his story as a K-9 handler with USA Today, telling of his experience working with Fito, a German Shepherd, and how they were reunited after four years of separation.

Angenend and Fito began working together in 2008 as a combat tracking team in the Marine Corps. Since the two were being trained as a wartime necessity, Angenend said he was initially hesitant to become attached to Fito. But things soon changed.

When Angenend and Fito flew to Afghanistan in 2010, Angenend slept on the plane with his head up against the door of Fito's crate. The two worked together to track down insurgents in Afghanistan and served for six months.

After they returned home, Angenend received the heartbreaking news that Fito would be leaving to train new K-9 handlers without him.

“As a Marine, I can tell you that possessing a steely reserve and unshakable bearing is at the core of our nature. As a man who loves dogs, I can tell you that it was one of the hardest things I have ever experienced. I was losing the friend I needed most,” he wrote for USA Today.

So Angenend had to move on with his life and work, training with other dogs, but never forgetting his bond with Fito. Then, in 2014, he received a life changing phone call: Fito was retiring and needed a home.

Angenend immediately agreed to bring him home. Their reunion was unforgettable.

“My outstretched arms happily welcomed him as he barreled into my chest. I’m not certain how long I spent hugging him as he licked my face. It was one of those rare moments in life where time just seems to stop. I realized right then that time and separation couldn’t weaken our relationship,” Angenend said.

Now, Angenend and Fito live happily together, as best friends. Their bond as handler and K-9 never faded, and easily transitioned to life-long friendship.

“We will never have a better friend than the friend we have in each other,” Angenend wrote.

And again, a special thank you to all of our Veterans!