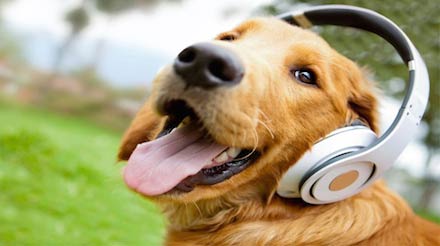 You’ve likely heard of CDs and music playlists designed for babies—there are even prenatal tracks available for moms-to-be to hold against their belly in hopes of it having the so-called Mozart effect, helping their kids grow to be more intelligent adults. (Some researchers find this theory to be a load of baloney.)

But how about dogs? Could our canine companions benefit from listening to music? And do they even enjoy it?

A recent advertisement on Spotify showed a playlist specifically geared toward dogs. The concept isn’t a new one—in 2010, artist Laurie Anderson performed a concert just for them in Sydney, Australia. She later revisited the tactic, drawing crowds of canines to Times Square in New York City, where she performed a concert only easily heard by dogs (owners could wear a pair of headphones to follow along). She then replicated the performance for an episode of “The Late Show With Stephen Colbert.” Some of the dogs seemed to react positively.

But whether or not we are simply anthropomorphizing our pets by playing music for them is a question for the experts.

Family Dog columnist Stanley Coren broached this topic a few years ago, when he reported on research by psychologist Deborah Wells of Queens University in Belfast for a Psychology Today article. Wells examined dogs’ reactions to hearing modern pop music, classical music, and heavy metal while living in a shelter environment. She found that they might actually enjoy the music—depending on what kind it is.

The dogs listening to pop music showed did not seem to have any type of reaction. The heavy-metal tunes prompted barking and agitation, and the classical music seemed to have a calming effect. “It is well established that music can influence our moods,” Wells summarized. “Classical music, for example, can help to reduce levels of stress, whilst grunge music can promote hostility, sadness, tension, and fatigue.”

So if Wells’ research is to be believed, perhaps the Spotify playlist, which features various classical works, is a hit after all. You can let your dogs be the judge by checking it out here.