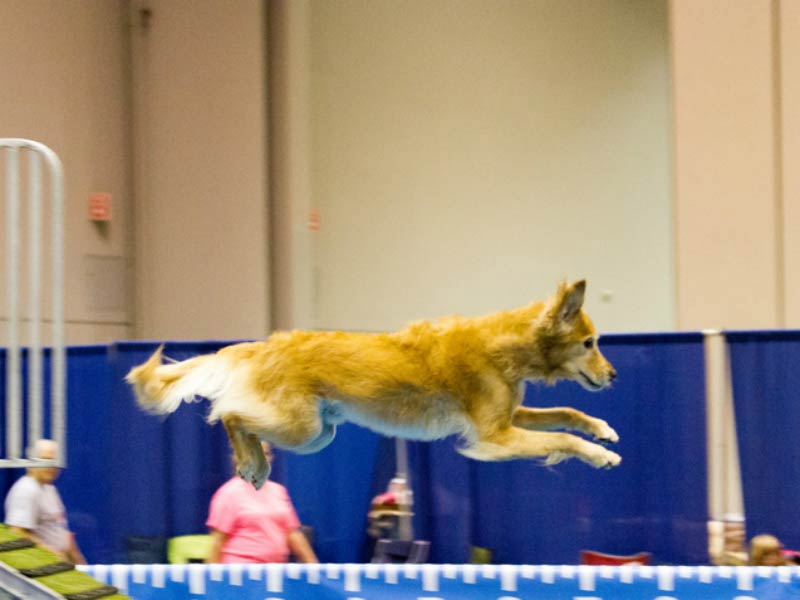 Could records be broken this year? We thought we'd take a look at the current records and explain a little bit about what those mean in terms of diving dog competition.

As seen on the bottom of the NADD homepage the current record holders are the following:

Storie, a Labrador Retriever, holds the record for Distance Jump, with a jump of 30 feet and 7 inches. A distance jump is when the dog runs off the dock and jumps into the water after his toy. The judge determines the distance of the jump by visually noting the point where the base of the dog's tail enters the water.

As NADD shared in its Facebook post, Storie will be competing in Orlando, trying to set a new world record in the Open Division. The Open Division is for all size dogs.

(Check out our exclusive interview with Storie from the 2016 AKC National Championship Presented by Royal Canin here!)

Lap class, on the other hand, is for dogs under 16 inches tall. The current Distance Jump Lap Class record holder is Gerry, a Jagd Terrier, with a jump of 22 feet and 6 inches.

Another discipline in NADD dock diving competition is Air Retrieve. In Air Retrieve competition, a bumper is held out four feet above the water and starts at 6 feet out from the dock. Diving dogs have to run off the dock and knock the bumper into the water. The dog does not have to grab the bumper, just knock it off.

With every successful attempt, the bumper is moved further and further in distance, in one-foot increments. The dog continues until he has two misses at a particular distance. The distance of the last successful attempt is the dog's qualifier.

For Air Retrieve records, there is a tie at 26 feet between Bo and Augie, both All-American Dogs. Bo will be competing in Orlando, trying to regain solo ownership of the world record.

Dock diving is one of the fastest up-and-coming sports in the canine world. In 2014, the AKC began recognizing NADD titles, and now titles can be displayed on your dog's AKC records.

Interested in learning more about this exciting and fun sport? Check out the NADD website for more information.

And make sure to tune in to the AKC Facebook page this weekend for diving dogs competition!