Blind, Neglected Dog Gets Shave and a New Start 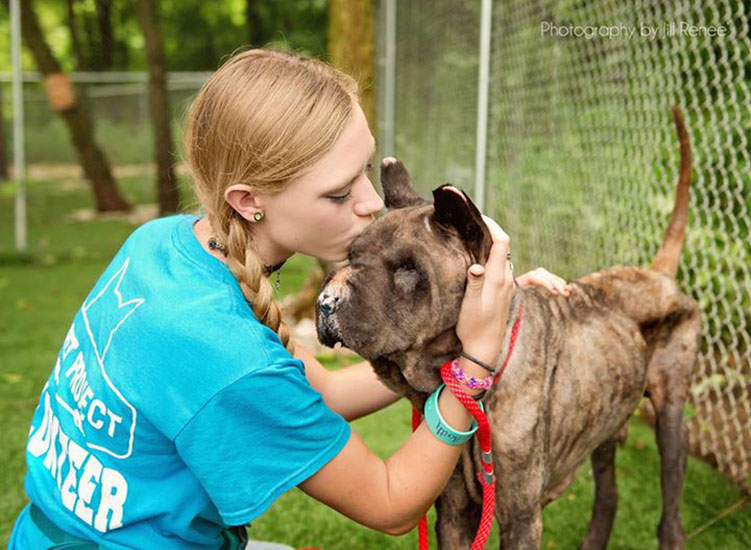 One person described him as the “ most disheartening neglect case” she had ever seen. When Harry, a Chow Chow, was brought into a Kansas City, Missouri, animal rescue he was covered with matted hair and flies had left his ears raw. Even worse, he is nearly blind and missing a part of his nose.

“The front of his nose is all gone,” Tori Fugate, spokeswoman of the KC Pet Project. Little was known about the dog before he came into the shelter, except that people in the community say they had seen him chained to a tree in a backyard. He appears to be about 4 years old, maybe younger. It’s hard to estimate age on a dog in such bad shape.

No one can say exactly how he lost his nose, but it is a recent injury, Fugate told AKC. The veterinarian who examined Harry said it “looked like a clean slice,” which means it may have been no accident.
His blindness, Fugate says, is the result of untreated case entropion, a condition in which the eyelids roll inward, causing eyelashes and skin to rub against the surface of the eye. In Harry’s case, his corneas were so badly scarred that it seriously impaired his vision.

He also tested positive for a dangerous parasite known as heartworms. Harry came into the shelter on June 21, covered in six inches matted hair that was so filthy “it was just stiff,” Fugate says. In cases like this, “we have to do the most drastic thing—shave them—so they can start over.” It took two and a half hours to get rid of all the hair, about five pounds of it. “It wasn’t until we shaved him that we realized how skinny he was.”
Harry’s medical expenses are coming from donations to the Roadrunner Fund, and will be matched by the Petco Foundation. A special fund just for Harry has been set up on that page. The Roadrunner Fund was named in honor of a Tibetan Spaniel who had been strangled and tossed off a third-floor balcony last November. His injuries left him blind, but the KCPP treated his wounds and found him a home.

A picture of Harry when he came into the shelter

The good news is that Harry is now in a foster home, where he is recovering from his physical issues and learning to be a pet. Despite the injury to his nose, Fugate says, he can still sniff and, even though he can’t see, he can make his way around the house, including walking up stairs. Best of all, he’s shown a sweet, gentle nature, and is responding eagerly to something he’s never had before—love and attention. “We have all fallen for him,” says Fugate.

It took two hours to take off all the hair

Ready to start his new life

All photos courtesy of the KC Pet Project

For more about training, visit the AKC Canine Good Citizen page
Related Stories:
Meet The Rescue Dog Who Became A Disney Star
This Dog Was Stolen And The Most Amazing Thing Happened
https://www.akc.org/wp-admin/admin-ajax.php
Get Your Free AKC eBook