An Inside Look Into the Splashing World of Dock Diving 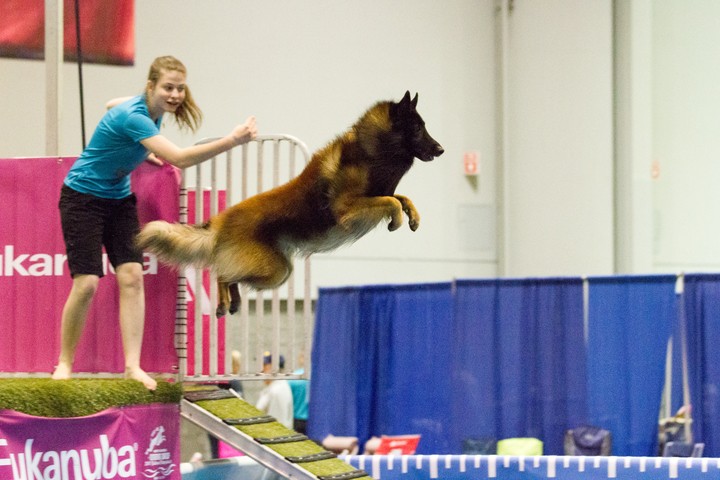 If you've ever seen a Dock Diving event, it's certainly an experience you won't forget. But did you know that Dock Diving is a relatively new dog sport? The sport was officially recognized by the AKC in 2014 and since then, over 6,000 dogs have jumped on in. We got a special inside look into the world of Dock Diving this weekend at the AKC National Championship, first with record holders Storie and her owner J.D. McKnight, and now with Debbie Markwardt, President of North American Diving Dogs (NADD). Markwardt talked to us a little about how she brought Dock Diving to the AKC and the benefits of the sport for dogs and owners alike.

AKC: How did you get involved with the AKC to get Dock Diving recognized as a sport?
Markwardt: I’ve got a Doberman, Justice, and I compete with her in AKC Agility and Lure Coursing and I wanted to add in Dock Diving as a sport. Most people thought it’s more for entertainment, and fairs and festivals, but no, it is a sport to a lot of dogs. So I took it to the AKC, understanding their programs, and through the AKC and the Board of Directors, they approved it. So what we did, we took our portable pools and docks to the AKC clusters, and introduced it to all the dogs, because that’s where the dogs are. We introduced the sport to [them], and since that, in 2 years, we’ve got over 6,000 new dogs jumping in this.

AKC: Is Dock Diving available for all breeds of dogs, not just what you would consider “water dogs”?
Markwardt: It is available for all dogs. We’ve got two divisions, a Lap Dog [division], which is a dog 16 inches and under, [and an Open Class, which is over 16 inches]. Now, [the smaller dogs] don’t have to jump the same distance as your big dogs do. It’s almost half the distance for them, but it’s the same divisions that they earn titles in, but in the [Lap Dog] division, this distance isn’t quite as long.

AKC: And how has this helped you form a bond more with your dog?
Markwardt: I believe, if people get involved with their dog, no matter if it’s successful [at the sport], it’s something they can do together. And it creates a bond, and by creating a bond…they’re looking at their dog in a different way. Now we want to jump further, so by doing that, it’s just a better bond.

Check out our live stream of Dock Diving at the AKC National Championship below.

Interested in creating a better bond with your dog and getting more involved in the dog world? Click here to learn all about how to get involved in Dock Diving, Agility, and other dog sports.