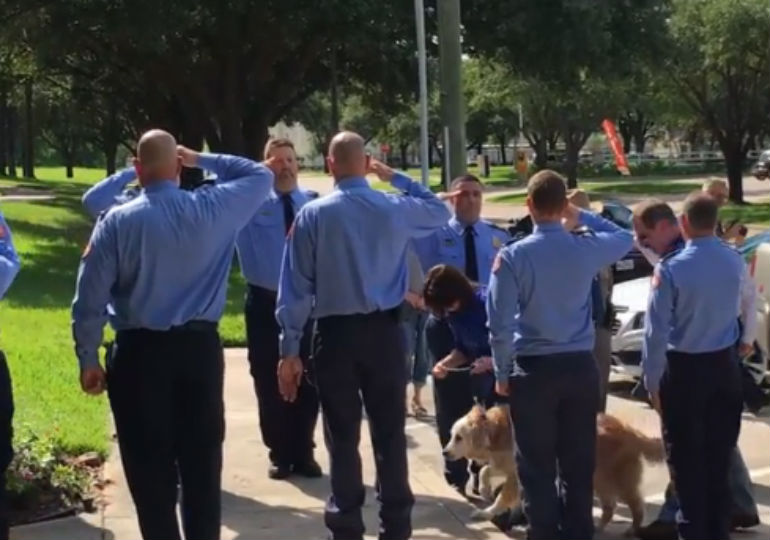 The world has lost a great K-9 hero. Bretagne, the last known 9/11 search and rescue dog, passed away on Monday. Bretagne, a 16-year-old Golden Retriever, was one of 300 or more dogs to search through the rubble for survivors after the attack on the World Trade Center.

Bretagne was two-years-old when she worked with her handler Denise Corliss and Texas Task Force 1 searching for 10 days after the 9/11 attacks. During her career she also worked with search teams after Hurricane Katrina, Hurricane Rita, and other disasters, according to TODAY.

Bretagne, who celebrated her 16th birthday in New York City last year, retired from active duty at age 9, but continued to serve her community, working as a reading assistance dog at an elementary school near her home in Texas. Read more about Bretagne’s incredible life here.

On Monday, Corliss brought Bretagne to Fairfield Animal Hospital, making the difficult decision to put her down after the dog had stopped eating and experienced kidney failure. Bretagne was met at the hospital by representatives from Texas Task Force 1 and the Cy-Fair Volunteer Fire Department, as well as other agencies, who stood at attention and saluted the K-9 hero as she entered the hospital.

Again, they saluted Bretagne as she exited the hospital draped with an American flag, and accompanied her in a formal procession to Texas A&M University. Without a doubt, Bretagne was an incredible k-9 hero and will be missed by all.

“This was a very small way for us to pay tribute to a dog who truly has been a hero,” Cy-Fair Volunteer Fire Department Captain David Padovan told TODAY.

A long-term surveillance study of the search-and-rescue dogs deployed after the attacks on September 11, 2001, funded by the AKC Canine Health Foundation, has been taking place at the Penn Vet Working Dog Center. Read more about the study here.

Apollo, The First Police K-9 To Respond At Ground Zero

Sage, Who Started Work At The Pentagon—And Moved On To Iraq