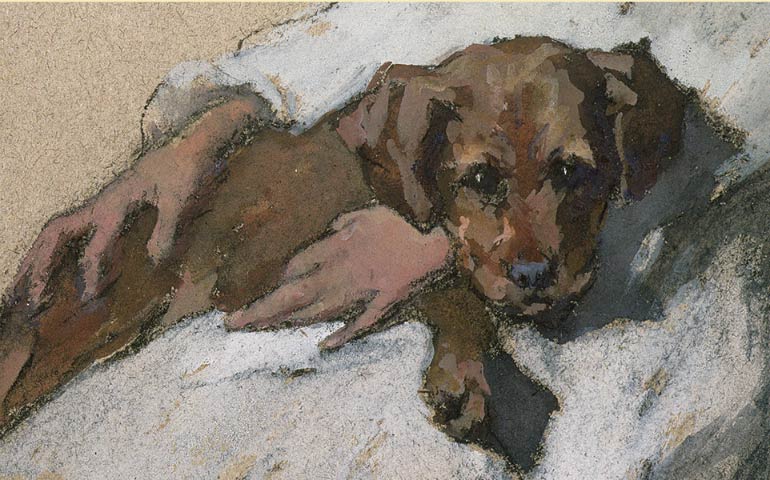 For Picks of The Litter, a regular book review series, Ranny Green critiques “Two Dogs and a Parrot: What Our Animal Friends Can Teach Us About Life

This cranial jukebox of enriching stories reflects a tough realism throughout whether the subject is an Irish Setter, Golden Retriever, or a medium-sized parrot.

The internationally known author and the executive director of Benetvision, a resource and research center for contemporary spirituality, establishes in the Introduction, “My animal friends drew me out of myself and made me aware of another whole level of what it means to be alive.”

From this threshold, she introduces you to Danny, an Irish setter; Duffy, a Golden Retriever; and Lady, a parrot, all of which affected her values and priorities in life in a different, but personal, manner.

Chapters associated with Danny deal with acceptance, self-knowledge, enjoyment, assertiveness, purpose, balance, and empathy, each relating to a specific incident or lifestyle element associated to the dog and life lessons moving forward.

“We let Danny go on to become his unique self in ways that brought laughter to us all,” she writes. “I had wanted a dog with character, and I got a dog who was a character. And we were all the happier for it.”

Later she adds, “We have all be given everything it takes to become the best of what we are. Life is a matter of discovering what that is and then, like birds in flight, refuse to be enticed off the mark by empty promises, by shallow goals. Life is the enterprise of learning how to become everything we are and all we want to do with it. Anything else is mere charade, a life only partially lived.”

From puppyhood to his passing, the spunky Irish Setter is a whirlwind challenge for the author, who characterizes him as a “mild, playful rogue who became a mighty savior,” prompting her to note, “Most of life is simply about finding the more of us, rather than finding the whole of us.”

Following Danny’s death, enter Duffy, a programmed Golden Retriever who is bigger than the breed standard and therefore wasn't destined for the show ring like his breeder had hoped.

“But Duffy’s love for others made him almost universally accepted in a way few – either dogs or people – ever really know,” Chittister writes.

She links rejection, being wounded, relationships, insight, presence, diversity, and beauty to this animal that came to blossom in an environment replete with plenty of social interaction.

As Duffy slowly emerges from his shell, Chittister emphasizes, “The expectations we have for another will not change either their basic interests or their basic abilities. The individualism that is their gift to the world must not be denied. And the error is not theirs, it is ours. We can’t make anyone else be what we want them to be – but we can let them be themselves, and love them for that and that alone.”

Duffy becomes the teaching lesson here for diversity: “When we begin to see people as ‘types’ rather than as individuals, we cut ourselves off from reality.

“… Lack of outreach in the human life smothers the human soul. We forget how to live, we fail to risk love, we destroy the seeds of love by refusing to nurture them.”

Following Duffy’s death, the house remains quiet for a number of years until Lady Hildegard, a medium-sized parrot takes up residence. Life’s all about change and Chittister, a previous bird owner, is about to experience it big time.

“Change calls for gratitude for the past and trust in the future. It calls for letting go of the chains that have bound us and for resting every possibility along the way.”

Lady, in essence, prompts a jump start in the author’s life, and is the source for chapters targeting change, materialism, play, love, adventure, essence, and respect.

If you’re looking for a warm, fuzzy read about pets this isn’t it. Conversely, it’s a road map of guidelines – some major highways, some side routes – for cultivating your life thanks to the initial challenges and later rewards of pet ownership.

This e-book is a great resource for anyone who's considering dog ownership or already owns a dog. Download for tips on how to be the best dog owner you can be.
*Turn off pop-up blocker to download
AKC Privacy Policy
Founded in 1884, the AKC is the recognized and trusted expert in breed, health, and training information for dogs. AKC actively advocates for responsible dog ownership and is dedicated to advancing dog sports.