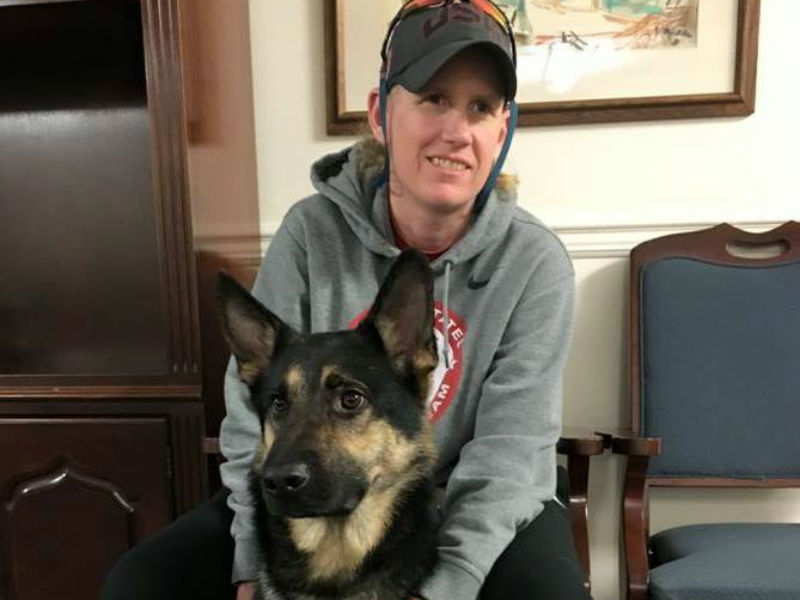 U.S. goalball team member Jen Armbruster is ready for the 2016 Paralympics in Rio. The six-time Paralympian is decorated with a gold medal from the 2008 games in Beijing, a silver from Athens in 2004, and a bronze from Atlanta in 1996. She hopes to take home another medal in her last Paralympics, where she will be competing in goalball, a sport for the visually impaired where players try to roll a ball with bells in it past their opponents and into a goal.

In addition to her family, friends, and fans cheering her on, she has another teammate who has helped her on her journey to the 2016 games — her guide dog, Simon.

AKC talked to Armbruster about her experience at the games, and how her guide dogs have helped her make it to the top of her sport.

AKC: How did you get started with goalball?

Armbruster: In 1989 I started having some eye pain and lost my vision in my right eye. About three months later, the same thing happened in my left eye. So I was legally blind at that time; I only had my peripheral vision in my left eye. I was still playing competitive basketball, and someone called me up to play a sport called goalball. My parents took me down to the gym, and I was kind of hooked ever since.

AKC: What’s your Paralympic experience been like so far?

The ride has been great. I haven’t played with the same team twice, and it’s been a great experience just sharing the games and that high level of competition with different girls, some of whom I have coached and who are now my teammates.

Watch the U.S. women's team defeat China during the final goalball match at the 2008 games in Beijing.

AKC: Why did you decide to get a guide dog?

Even when I wasn’t legally blind, I didn’t really have any night vision. So I applied for a guide dog when I was 16 or 17, and then I went totally blind in ‘92. I updated my application with The Seeing Eye, telling them that I was completely blind. They got me in the January class in ‘93.

I’ve always been a dog person, and I was never a big fan of my cane. Through the U.S. goalball team, I had met other folks who had guide dogs, and I always thought that the dog was faster than using a cane. And also the social part of it: I think it’s a lot easier for people to approach you. I think the barriers are down a little bit more with the dog than with a cane.

AKC: Can you tell us about your current dog?

Simon (a German Shepherd Dog) and I have only been together for nine months. He’s a new boy. I lost my other dog kind of unexpectedly. Simon is a male shepherd, and he’s the biggest guy I’ve worked with, and he’s good. He’s 2-½ years old. He’s my fourth one.

AKC: Have you always had a German Shepherd Dog as a guide dog?

AKC: Do you consider yourself a dog person?

We’ve always had pets my entire life. Always had dogs growing up. Usually we had smaller dogs because my dad wasn’t a huge fan of bigger dogs. But my family has had a lot of big dogs since then; my parents always took my retired guide dogs.

AKC: Can you describe what it was like working with your first guide dog?

It was pretty awesome. Each dog has been so different. The first one was obviously the first time I’ve been entrusting a dog to guide me before, but every time there is that moment of the organization introducing the dog to me, and it’s kind of magical.

It’s just such a feeling of freedom and independence. I’ve been fortunate enough, except with my last dog, to have my dog until retirement. So it's been 25-26 years of that freedom, and that (when her former guide dog passed away) was the first time I’ve had to go back to the cane, and it was a drastic difference for me. Using the cane was a reality check for me of how much freedom that dog gave me.

Watch what the training process is like for a guide dog at The Seeing Eye.

AKC: What was the pairing process like for you and your current dog, Simon?

I think The Seeing Eye has a better track record than e-Harmony for sure. I have a five-year-old son, and I have another dog in the house, and they take all of that into consideration. Also, I fly a lot; obviously I use trains, planes, and automobiles all the time. So I had to have a dog ready to work and put on about 3-to-5 miles a day.

AKC: How have your guide dogs helped you train for goalball?

Probably the biggest thing is the mobility and the freedom to be able to go to those early morning workouts. I think it’s just having the time and the freedom that the dogs allow me to do everything: juggling my schedule, my kid's school schedule, and even the social life, and getting on the plane and going across the country for tournaments. My dogs have always been a part of that.

The one thing I’ve never done is bringing my guide dogs to the Paralympic Games because my focus has to be on my team. I just don’t think it’s fair to my team. And with the dogs being on a schedule, as well, it’s just not fair. I’ve always left my dogs with my parents.

AKC: Do your dogs go with you to local competitions?

My dogs have always gone with me to competitions, and Simon is by me in the gym all the time. When I got him, The Seeing Eye trainers said, “Are you still playing goalball? Because he’s probably not going to be a good dog to have on the side because he just loves the ball so much.” And he’s not. He goes with me to competitions, but he actually has a travel kennel and he stays out in the hallway. He’s my first guide dog who hasn’t been able to hang out on the bench — he is very ball driven. Maybe when he grows up a little bit more he might be a little better, but he can’t be in the gym when I’m playing.

AKC: What’s the biggest misconception people have about guide dogs?

I think the biggest misconception is that the dogs just know where you want to go, and you can program them like a GPS and they will magically take you there and you're just along for the ride. They don't know that this is a partnership between you and your guide dog. The trust flows both ways.

This interview has been edited and condensed for clarity.