The Vizsla Puts the “V” in Versatile 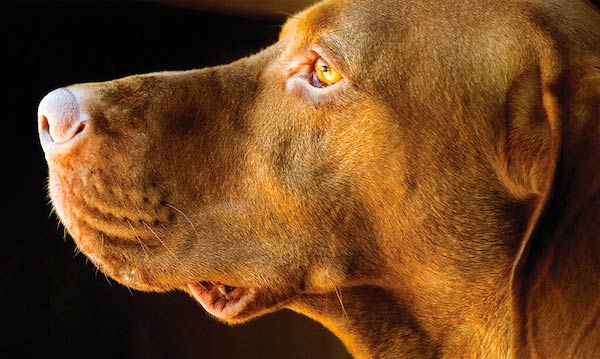 The Vizsla was developed in Hungary centuries ago as both a versatile hunting dog and a devoted companion, and the breed today retains those combined qualities. Vizslas typically love to do things with their owners, and they’re curious and interested in all kinds of activities.

With good socialization and consistent training, there’s an amazing variety of ways for Vizsla owners and their dogs to have fun. You’ll see the breed competing in field trials, hunting tests, conformation dog shows, obedience, rally, agility, and tracking. Recently some have added lure coursing and barn hunt competition to their list of activities.

When they’re not running around or being goofy, the breed has a natural elegance. (Claire Krigbaum/AKC Photo Contest)

Vizslas also excel in other roles. Because of their amazing noses, they have been one of the top three breeds used as bomb-sniffing dogs by the Transportation Security Administration (TSA). Search-and-rescue Vizslas were among the canine teams who worked at Ground Zero following 9/11, and the breed is also used successfully in guide-dog programs.

Many Vizsla breeders are putting a lot of effort into maintaining the breed’s versatility, and each time a Vizsla earns a dual championship (field plus show), it is a reflection of these efforts. When you’re watching Vizslas at a dog show, it’s likely that many of the dogs in the ring also hunt birds or compete in companion events like obedience, rally, and agility.

Vizslas are beautiful to see working in the field. Here are a few photos:

The breed was developed centuries ago in Hungary as a nobleman’s bird dog with superb scenting abilities and a strong instinct to point game. (Beth Nash)

A brace of Vizslas on point, the second dog “honoring” the other. (Lin Kozlowski)

The Vizsla is a talented retriever, working both on land and in water. (Lin Kozlowski)

Because this is a sensitive breed, early and ongoing socialization is important to make sure the dog is confident enough to enjoy various activities. Training is important, too. The same qualities that give these dogs their versatility can also make an untrained Vizsla hard to live with. They can be unbelievably creative in the ways they get into trouble. Fortunately, they typically love training when it is consistent and positive, and they thrive on the attention that is part of the training process.

Vizslas love the fun of training for canine sports such as obedience. (Beth Nash)

The breed’s national parent club, the Vizsla Club of America (VCA), sponsors a Versatility Certificate program that encourages owners to participate with their dogs in field, obedience, and conformation. Dogs who meet the requirements in all three areas are awarded a Versatility Certificate. These requirements can be met by passing specific tests developed by the VCA and offered by local Vizsla clubs, or by earning the equivalent AKC titles. One great aspect of the versatility program is the way it brings together new owners with experienced Vizsla people to work with the dogs.

A star example of the breed’s versatility was a Vizsla named Chartay, who in the summer of 2000 made history by becoming the first dog ever—of any breed—to earn an incredible five AKC championship titles in different disciplines. Her official name was TC/AFC/MACH Legacy’s DeChartay, UDX(5), MH, HOF. Here’s what those letters mean:

Chartay at a field trial.

Chartay’s owner and trainer, Jack Sharkey, said that he chose the Vizsla breed because of their loyalty and intelligence. Sharkey had always been a dog lover, but it wasn’t until retirement that he discovered the breed and became involved in canine competitions. He was quickly immersed in the sport of dogs and eventually became an AKC field trial and hunting test judge himself.

Chartay was born in 1991 and began an amazing seven-year journey by winning her conformation championship in 1993. Field training and competition followed, and she gained both her Field Champion and Amateur Field Champion titles in 1995. Next was obedience work, with her OTCH title earned in 1997. Then on to learn agility, with Chartay earning the MACH title in 2000—at age 9.

Chartay aces the weave-poles on her way to the MACH agility title.

Chartay’s quintuple-championship crown highlights both the breed’s natural abilities and her owner’s dedication to training her. “I am fascinated by dogs performing what they are bred to do,” said Sharkey. “The wide variety of AKC events are an opportunity for dog owners to enjoy the competitive spirit.”

Jack and Chartay traveling to an event. Because of Chartay’s extraordinary accomplishments, she was given VIP status by American Airlines.

In 2006, the AKC honored the achievements of this wonderful dog-owner team with a special ceremony and the unveiling of a portrait of Chartay to hang in the lobby of the organization’s headquarters in Raleigh, North Carolina. “Chartay’s accomplishments demonstrate the versatility of what pointing breeds are all about,” said Sharkey on the occasion.

Training and competing together develops a close bond like no other between dog and owner.

The qualities that make Vizslas such excellent bird dogs—energy, stamina, soundness, biddability, intelligence, drive, curiosity, and the instincts to look for birds, point, and retrieve—can also be channeled into other activities that are fun for both the dog and the owner. Where this can go wrong, however, is when the owner has expectations that aren’t consistent with the dog’s instincts and needs.

Consider the new owner who is looking at the dog as a running partner. Of course the dog is delighted to go along on those runs. After the run, however, the dog may not be nearly as ready to rest as the owner is. The owner wants to sit down and read his e-mails or watch cat videos on social media, and the dog is pestering for attention—say, a nice game of fetch. Or maybe the dog notices that the owner’s attention is elsewhere, resulting in an opportunity to direct some energy to digging, chewing, barking, counter-surfing, pillow-unstuffing, book-shredding, or grabbing the toilet paper and decorating the house. Running exercises the dog’s muscles, but it may not meet his need for mental activity.

It is a rare Vizsla who will be content with a dull, routine life. Owners need to make sure their dogs have opportunities to use their energy and instincts. Even in a hunting home, the dog isn’t going to be able to hunt birds every day. The season doesn’t last all year, and even if it did, things like ice storms and 100-degree weather will result in days when the dog will need other kinds of physical and mental exercise.

Depending on the dog’s individual traits, there are lots of ways to channel a dog’s interest in finding things, chasing things, retrieving things, and mental problem-solving. This can include activities like obedience, rally, agility, tracking, lure coursing, therapy visits, and nose games. Tricks are another way to entertain dogs and people; in fact, many Vizslas excel at learning to roll over, shake hands, bow, crawl, and catch flying treats.

Training not only keeps the dog’s mind and body busy but also nurtures the dog-owner relationship. (Ron Spohn/AKC Photo Contest)

One thing all of these activities have in common is training. The saying “untrained is unloved” definitely applies to Vizslas! Fortunately, another trait is that they love to learn things with their people. With a positive and consistent approach, training is fun for both owner and dog. (And many people find that the dog is training the owner at the same time the owner is training the dog.) Besides providing a way to channel the dog’s energy and instincts, training also helps develop the kind of bond that is one of the great joys of living with Vizslas.

To learn more about the breed, check out the Vizsla breed pages and visit the website of the Vizsla Club of America.

Beth Nash is a longtime Vizsla owner and breeder and writes the AKC Gazette’s breed column for the Vizsla Club of America, which appears in the January, April, July, and October issues. Arliss Paddock is Senior Editor of the AKC Gazette.

Are you looking for inspiration on new tricks to teach your dog? If the answer is yes, then this is the e-book for you!
*Turn off pop-up blocker to download
AKC Privacy Policy
Founded in 1884, the not-for-profit AKC is the recognized and trusted expert in breed, health, and training information for dogs. AKC actively advocates for responsible dog ownership and is dedicated to advancing dog sports.