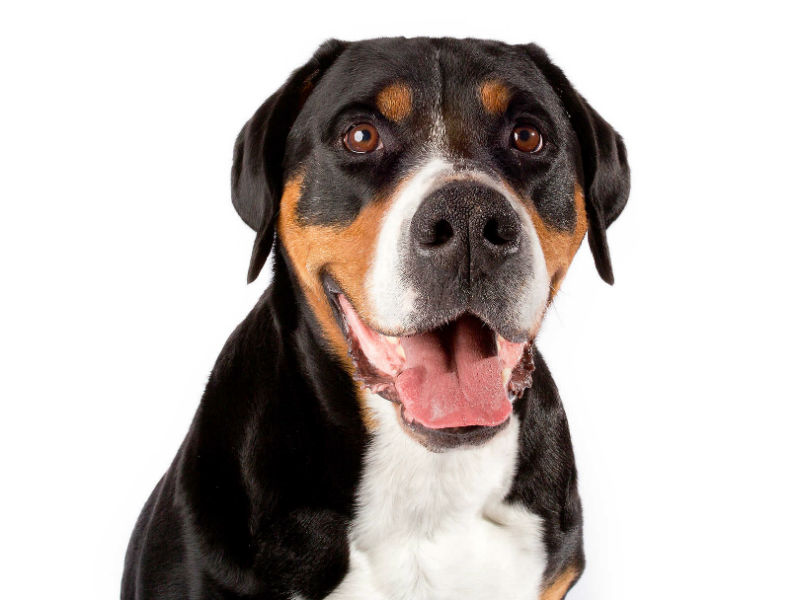 The large and heavy-boned Greater Swiss Mountain Dog, known affectionately by lovers of the breed as the “Swissy,” is an enthusiastic and happy dog, with a strong love of people. Here are seven interesting facts about this bold and confident member of the Working Group.

1. The Greater Swiss Mountain Dog was developed in Switzerland as an all-purpose farm dog. They were needed as draft dogs to pull heavy carts, as drover dogs to move herds of dairy cattle, as watchdogs, and also as family companions. They are thought to be one of the oldest of the Swiss breeds, and their ancestors played a key role in the development of the Rottweiler and the St. Bernard.

2. The large, muscular ancestors of the modern day Swissy were known as “Metzgerhunde,” which translates to butchers’ dogs. By the 19th century, they were in wide use by farmers and tradesmen across central Europe. At one time, they were considered to be the most popular dog in Switzerland. But by the year 1900, their population had drastically declined, most likely because their drafting duties were no longer needed with the increasing availability of mechanized transportation.

3. Swissys are a rare breed, even today, both in the United States and their native Switzerland. During World War II, the Swiss army used them as draft dogs. But by the end of the war, in 1945, there were only about 350-400 Greater Swiss Mountain Dogs left. The first Swissys were imported to the U.S. in 1968.

4. Their history as a draft dog makes Swissys natural pullers, and their strength is impressive. The average Swissy is capable of pulling a load of 3,000 pounds or more, so walking politely at the end of a leash can be a challenge. From the time he’s a puppy, it’s important to teach your Greater Swiss Mountain Dog how to behave properly when he’s on leash.

5. Hot weather is difficult for Greater Swiss Mountain Dogs. Most of them do not handle the heat with ease, so during hot summers, or if you live in a hot climate, be sure your Swissy has access to clean drinking water and lots of places to escape the direct sun. Consider bringing your dog into an air-conditioned house when the mercury peaks. And never exercise your Swissy during the hottest part of the day.

RELATED: Keep Your Dog Cool With These Hot Weather Hacks

6. Swissys tend to match their activity level to that of their human family, but need at least one or two walks a day. However, to keep your dog in peak condition, consider a more vigorous schedule of exercise. The working spirit and versatile background of the Greater Swiss Mountain Dog makes them super partners for many different activities, including drafting, which is the pulling of a cart or wagon. Other sports your Swissy might enjoy are agility, backpacking, herding, hiking, or obedience trials.

7. Another exciting activity for your Swissy is weight pulling, the canine version of a tractor pull. Each dog in the competition must pull a loaded cart 15 feet from a standing position. There is no physical contact allowed between the dog and his handler, so he must be willing to do the job on his own. Amazingly, the current wheeled record pull by a Swissy is more than 4,800 pounds. This sport allows your dog to show his physical strength, as well as his strength of character, as he demonstrates his desire to work for you.