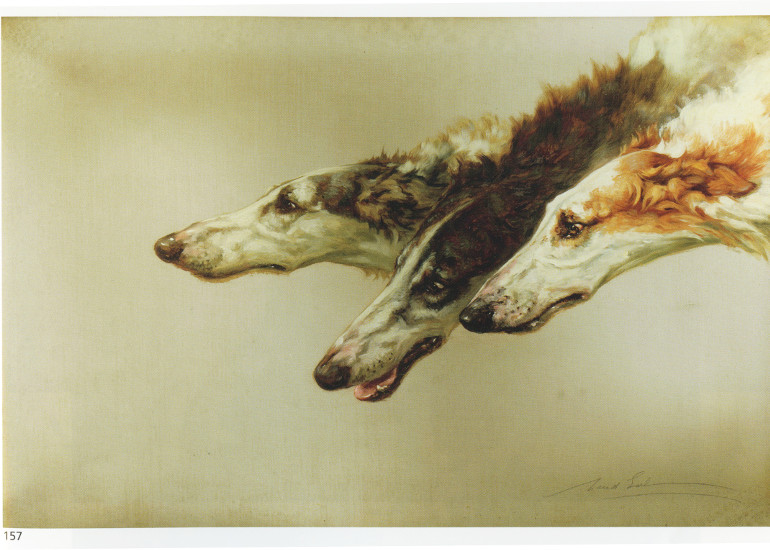 Through the 1920s and early '30s, a debate raged among Russian Wolfhound fanciers: Keep the breed name, or change it to “Borzoi”? Louis Murr, Gazette breed columnist and leading “Wolfhound” advocate, insisted that “any sane breeder can see why the name Russian wolfhound should be retained.”

Borzoi in Russian means swift…The word swift means but little as far as Russian wolfhounds are concerned as it is only one of the qualities of the breed. There are other qualities quite as obvious, and there are other breeds which are swifter in the race. Greyhounds are “borzoi” since they are even swifter than Russian wolfhounds. If one word like swift designates a breed, why not look up some word for long ears and tack it on bloodhounds?

The name “Russian wolfhound,” on the other hand, spells romance and exactly fits the breed. It describes the dog as a hunter of wolves and refers to the country from which it came and where it was used for hunting. To say “Russian wolfhound” brings to mind an actual picture of life in Russia, and we can easily imagine how these animals appeared in the hunt.

Etymologically, “Russian wolfhound” is correct, and this name should be retained. “Borzoi” means nothing to the average mind; even if it did, why take the romance out of the breed?

The romance ended in 1936, when the AKC accepted Borzoi as the official breed name. Now, on to the next controversy: Is the plural form “Borzoi” or “Borzois”?