Pup Culture: He Taught Us How to Love Dogs 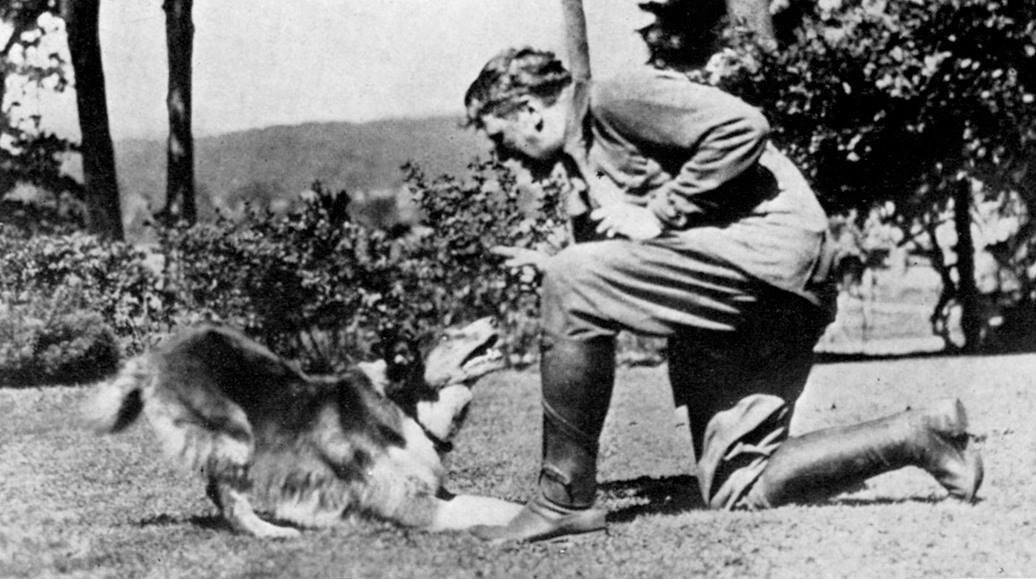 If I were a university professor and ventured the following opinion, I’d be stripped of my tweed jacket and PBS tote bag, denied tenure, and cast into the community-college wilderness. But seeing how I’m just a guy who works for a dog magazine, I can write this without fear of academic reprisals: One of the most influential American novelists of all time was Albert Payson Terhune.

A New Jersey native born in 1872, Terhune was a journalist who gained fame by writing a slew of novels and short stories based on the Collies he bred at his famed Sunnybank Kennels. His 1942 Time magazine obituary called him the “world’s most prolific and successful writer of dog stories,” and then goes on to say, “He wrote stories about human beings for more than 20 years before he sold his first dog story. A jut-jawed, athletic heavyweight, who had boxed exhibition bouts with James J. Corbett, Bob Fitzsimmons and Jim Jeffries, he wrote eleven hours a day, six days a week for some 30 years.”

Terhune’s fiction was never nominated for a Nobel, Pulitzer, or any other major literary prize. Critics and academics dismissed his work as mere juvenilia. Terhune himself on at least one occasion called his Sunnybank books “hack work” that financed his true love: breeding and exhibiting rough Collies on his rolling Wayne, New Jersey, estate.

Terhune was no Ernest Hemingway or Jack Kerouac, authors whose prose style was so revolutionary that it influenced future writers to reevaluate the act of writing itself. Nor did Terhune’s work open discussions of the great social issues, in the way that Ralph Ellison and Harper Lee’s fiction forced America to confront race relations. Terhune was simply a storyteller for money. And yet, this self-confessed hack’s influence on American life was huge and undeniable.

It’s safe to say that no one did more than Terhune to popularize the idea of the dog as a thinking, feeling member of the family. Before there was Big Red or Old Yeller or even Lassie, it was Lad, Wolf, Gray Dawn, and the other Sunnybank Collies that got millions of young readers asking, “Ma, can I have a dog?”

Among those brought up on the Sunnybank books was Stanley Coren, today a prolific dog writer himself. Coren first encountered Terhune’s work while in elementary school and was entranced by what he read. “The books were not fantasies but seemed to be about real people and real dogs in situations which felt as if they could actually happen,” Coren wrote for Psychology Today. “The dogs that he wrote about were not four-footed humans in fur coats who could talk or even fully understand human language; they were clearly dogs. But oh, what dogs!”

That touch of realism was a key to Terhune’s success. Though the books were fictionalized exploits of the Sunnybank Collies, they were informed by real-life canine behavior. There was, for instance, Bobby—the Collie who Terhune trained to fetch the newspaper from the front gate and bring it to the house. As Terhune told it, “So proud was he of doing this and of my praise that the next morning I found 23 papers at the door. In the wake of the newsman Bobby had collected a paper from every porch and gate within half a mile. I had a sweet hour’s chore sorting and smoothing them, and restoring them to irate neighbors.”

It’s no surprise that this escapade, and hundreds more like it, found its way into Terhune’s fiction. He knew it was just the kind of telling detail that any dog owner would recognize, and that it would appeal to any dog-crazy kid’s sense of mischief.

To this day, the dog world feels Terhune’s influence. Recently, the AKC Gazette posted on its Facebook page a picture of Terhune roughhousing with one of his Collies. The Gazette page is frequented by leading dog fanciers: breeders, handlers, and exhibitors fully steeped in the sport of dogs, many since early childhood. When it comes to anything doggy, it takes a lot to make these grizzled veterans gush.

And yet, gush they did: “I loved his books and read every one I could get my hands on!” “Been in dogs most of my life and he definitely was an influence due to his books being in my school’s library!” and “I read and LOVED and was inspired by his books,” ran a few of the comments posted in response to the grainy old photo.

We’ll never know exactly how many important careers in the dog game were inspired by Terhune. And his influence on the growth of today’s multi-billion-dollar pet industry is likewise incalculable. But it’s safe to say that anyone involved in the world of dogs for fun or profit owes a debt of gratitude to the squire of Sunnybank.

In his eulogy for Terhune, veterinarian Roy Hingley Hughes spoke on behalf of all dog lovers: “[H]e undoubtedly had a set of faults and flaws. But he cared for dogs and spent a lifetime instilling that love in other people as well. And that’s what makes him one of us and, in the final analysis, is what is most important about him.”