Pup Culture: “Alexander and Diogenes,” Landseer’s Little Joke on Us 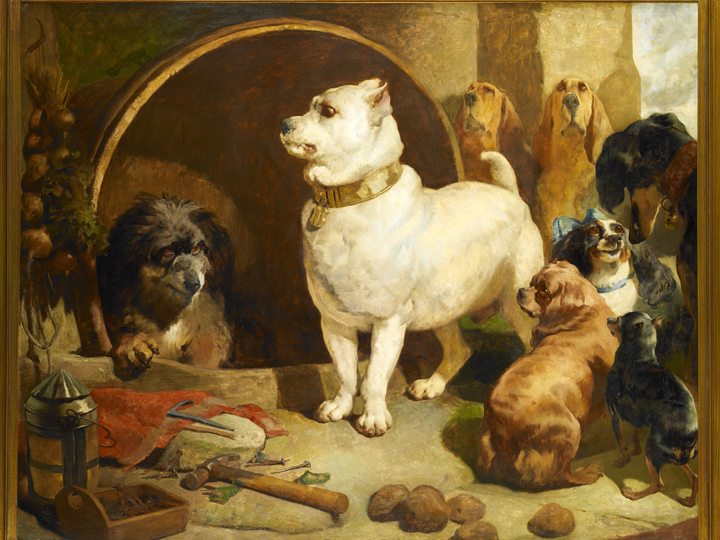 Sir Edwin Landseer (1802–73) was Victorian England’s leading painter of canine subjects. He was said to be the Queen’s favorite artist, and to this day museums and private collectors treasure his works.

But the amusing little dogatelle related here begins not in Victoria’s British Empire but in the Macedonian empire built in the fourth century b.c. by Alexander the Great. Plutarch, the foremost biographer of antiquity, provides the background:

“The Greeks assembled at the Isthmus and voted to send an expedition under Alexander against Persia, and proclaimed him their leader. Many officials and philosophers came to greet him, and he expected that Diogenes would do the same. But Diogenes paid not the least attention to Alexander and went on enjoying his leisure.”

“So Alexander went to him and found him lying stretched out on the ground, sunning himself. At the approach of so many people, he sat up a little and turned his gaze on Alexander. Alexander greeted him and asked him if he wanted anything. Diogenes replied, ‘Yes, Move over a little—you’re blocking my sun.’ ”

“At this answer, they say, Alexander was so surprised and admired so much the arrogant greatness of the man who had scorned him, that as they went away, he said to his companions who were laughing at him, ‘Nevertheless, if I were not Alexander I would be Diogenes.’ ”

This encounter between the world’s most powerful man and an eccentric but fearless philosopher has inspired artists for centuries. Dozens of painters have immortalized it on canvas, but none so whimsically as Landseer. Landseer’s take on “Alexander and Diogenes” echoes Old Master depictions of the famous meeting down to such fine detail as the overturned tub in which the unworldly Diogenes lived. Among many traditional renderings of the theme that could have inspired Landseer is the one seen here, by the 15th-century Flemish master Caspar de Crayer.

“Probably Landseer meant his picture to call attention to the vanities of human nature, and to make us smile at them,” wrote an art critic a generation after Landseer’s death. “The expressions on the faces of these dogs are almost human, so well do they tell their story.”

There’s more to Landseer’s visual joke. Diogenes was described by contemporaries as “doggish” because of his honesty and a complete indifference to worldly possessions and pretence—to say nothing of his habit of casually urinating in public. His goal was to live a fully unencumbered life, like a dog, and he would own no more than he could beg from passersby. (An ancient tale has it that upon seeing a little boy drinking water from his hands, Diogenes threw away his cup and said ruefully, “A child has bested me at plain living.”)

Because of this, Diogenes earned the nickname “Kynos,” the Greek word for “dog.” The English translation of Kynos is “cynic,” and the philosophy preached by Diogenes became known as “Cynicism” and its practitioners “Cynics.” From the name Cynic we get the word “cynical” (“always questioning”), and it is also the Greek root for such canine words as “cynology,” meaning the scientific study of dogs, and “cynophilist,” a fancy word for “dog lover.”

Diogenes was something of a pest and an eyesore in his hometown of Sinope, and being called a dog by his fellow citizens was not meant as a compliment. But he was proud to be known as “The Dog.” He considered dogs superior to the vain, acquisitive human race. Like a dog, Diogenes said, “I fawn on those who give me anything, I bark at those who refuse, and I set my teeth in rascals.”