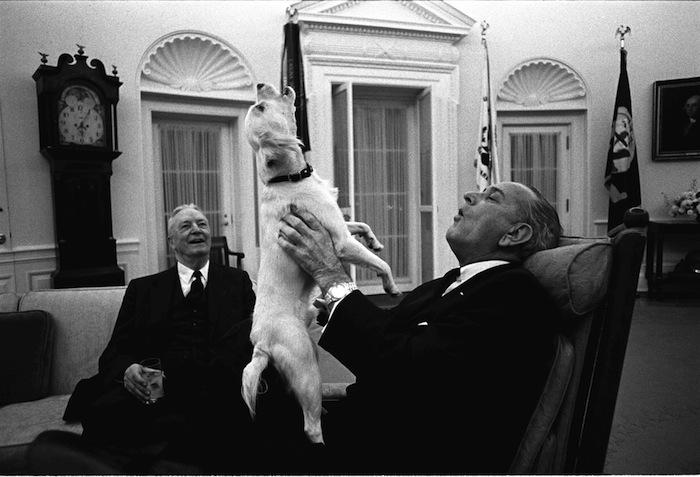 The most infamous moment in the long relationship between dogs and presidents occurred on an April morning in 1964. While walking on the White House grounds with a group of visitors and his Beagles Him and Her in tow, President Lyndon Baines Johnson decided to encourage Him to bark for his guests. To do this, LBJ used Him’s ears to hoist the dog up on his hind legs.

It went unremarked upon until a photo of the incident appeared in Life magazine. The public reaction was swift and vehement. In letters and phone calls to the White House, in newspaper editorials, on TV and radio talk shows, LBJ was denounced for animal cruelty. “Ears are for hearing, not for pulling,” chided the Humane Society of Texas. The story went as viral as viral could get in the Twitterless ’60s. So much so that the president had no choice but to issue a public apology. Privately, he was bewildered. Where he came from, it was common practice to tug a Beagle’s ears before the hunt to gauge whether a hound was in good voice. In an off-the-record conversation with reporters, he said that he had been yanking Him’s ears since he was a puppy and “he seemed to like it.”

Since then, Johnson has been presidential enemy number-one to animal lovers with long memories. Last year, we posted an innocuous photo of LBJ and one of his dogs and the comments section filled with condemnations of the man so ferocious you’d think “Beaglegate” happened 50 minutes ago, not 50 years ago.

But Johnson gets something of a historical bum rap, at least where dogs are concerned. After years of reading about the man and his times, I’ve concluded that LBJ was the rare politician for whom dogs were more than just a political prop trotted out for photographers. Hard as it may be for his doggy detractors to admit, the man was genuinely infatuated with dogs.

A rancher born in rural Texas, Johnson considered himself a consummate dog man. The 36th president was especially proud of his AKC-registered Beagles like Him and Her, and later, J. Edgar (a gift from FBI Director Hoover). But, as with any true dog lover, LBJ was a pushover for anything with a wet nose and four legs.

His favorite was a mixed-breed named Yuki. In the White House pressure-cooker, Yuki provided comic relief for the beleaguered president. LBJ was especially fond of treating visitors to demonstrations of Yuki’s singing voice: The leader of the free world and his little dog would howl together at the top of their lungs. (A photo that didn’t get nearly the circulation of the “ear pull” shot shows Yuki and LBJ serenading U.S. Ambassador to Great Britain David Bruce in the Oval Office.)

After Johnson left the White House in 1968, Yuki—“the friendliest and the smartest and the most constant in his attention than all the dogs I’ve known”—retired to the LBJ Ranch with his doting master.

In his retirement the former president recorded “Dogs Have Always Been My Friends: Lyndon Johnson Reminisces.” On this truly odd but endearing album, LBJ talks about dogs he has known. He tells how, at age 4, he explained to his stern father why one day he and his dog Rover had wandered off for hours. (“I just said, ‘Rover wanted to see the country, and I wanted him to see it.’ ”) And there’s the story of how Yuki, a stray LBJ’s daughter found near a gas station, came into his life:

“Luci picked him up—she has a love for dogs too—and brought him to me when she came for Thanksgiving dinner. And Yuki’s been here ever since. We left word that if the owner ever asked about him, to direct him here. But I’m glad the owner never missed him, because I surely would if he left me.” The album’s highlight is one of Yuki and LBJ’s unforgettable “duets.”

LBJ died in 1973. Yuki went to live with Luci Johnson Nugent and her family, and lived to a ripe old age.

Though no AKC employee, least of all this one, would ever condone hoisting a dog up by the ears, I’ve come to believe that Johnson’s lifetime devotion to the canine race was sincere. In my book, any president who’d interrupt his Thanksgiving dinner to welcome a gas-station mutt into his home and heart deserves a second chance.

A selection from LBJ’s weird and wonderful “Dogs Have Always Been My Friends”: