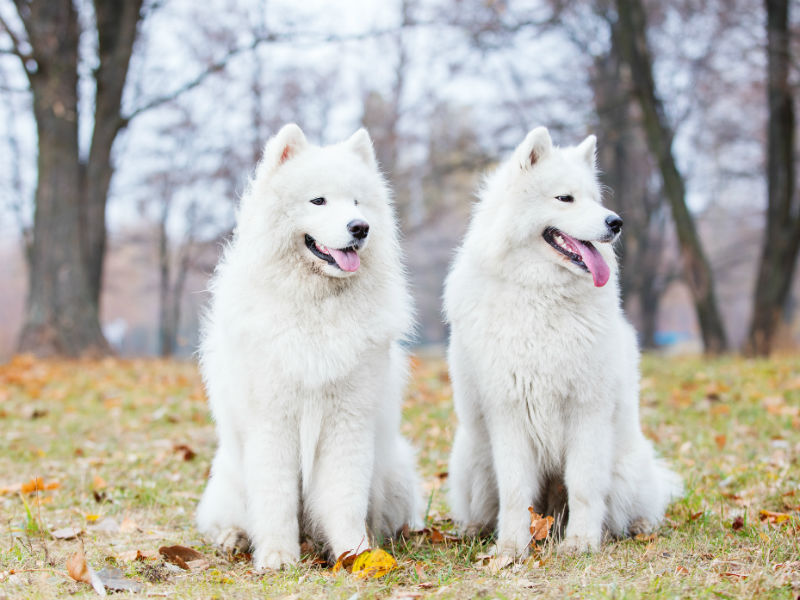 Cold weather and the scattering of snow bring out “the frisky” in a lot of our dogs, but some breeds thrive and even excel in frigid conditions—many of them Nordic spitz-type breeds. Here are seven reasons why these breed types are so well adapted to arctic-like weather.

The Alaskan Malamute, sometimes called the “Clydesdale of the Great White North,” has broad, bear-like paws that can grip ice, distribute the dog’s weight across a greater surface area, and keep the dog’s feet from sinking into the snow.

Almond-shaped eyes, such as those found in the Samoyed, enable the dog to squint and expose less of her eyeball to wind and frigid air while still being able to see.

These ears retain heat and reduce the risk of frostbite by having less surface area exposed to the elements. Hair inside the ears of a breed like the Siberian Husky act like built-in earmuffs over the flap of the ear.

A breed like the Siberian Husky can warm air around his face while he sleeps, and by the time he inhales air into the delicate tissue of his lungs, it’s been “pre-warmed” in the hair of his tail. With their faces warm and their paws tucked away under that tail, dogs have been known to sleep 12 hours straight during a snowstorm this way.

This coat, such as the one “worn” by the Finnish Lapphund, includes an outer coat made up of reflective, bristly, water-resistant guard hairs.

These hairs are twice the length of the undercoat and prevent snow from seeping into the undercoat and next to the skin. The dense, downy undercoat, on the other hand, is made up of fine, and sometimes wavy hairs, many of which grow from one follicle to form a dense layer of insulation that traps heat. In some Northern breeds, each hair follicle is implanted at a 45-degree angle (as compared to less-than-30-degrees in sleek-coated breeds) that results in a “stand-off” coat. Because the dog’s hair doesn’t lie flat to the body, it helps repel moisture from snow.

Some breeds, like the Norwegian Elkhound and Chow Chow, evolved with extra fat on the pads of their feet. Fat doesn't freeze as quickly as other living tissue, and combined with the tough skin covering their toe pads, the special fat prevents freezing that leads to frostbite and dead tissue.

Japanese scientists discovered that inside a dog’s paws is an efficient network of capillaries, arteries, and veins in close proximity to each other; heat travels from warm blood inside the arteries to the cooler veins surrounding them. As a result, cool blood returning from the feet gets reheated to lukewarm before it gets back to the body core. This prevents the dog’s body temperature from cooling down while the paws stay at a constant temperature. In other words, dogs have a heat exchange system in their feet that helps them maintain a constant temperature.

The elegance of nature’s handiwork in these breed adaptations is never an excuse to leave a dog outside in subzero conditions without access to dry shelter, food, and water, but it does explain why some of our breeds were of such importance to the cultures that developed, and relied on them to survive.

Speaking of dogs in the snow…

For advice on keeping your dog safe this winter, check out our tips here.