Meet the Neapolitan Mastiff – Formidable With Intruders, Loyal and Loving With Family 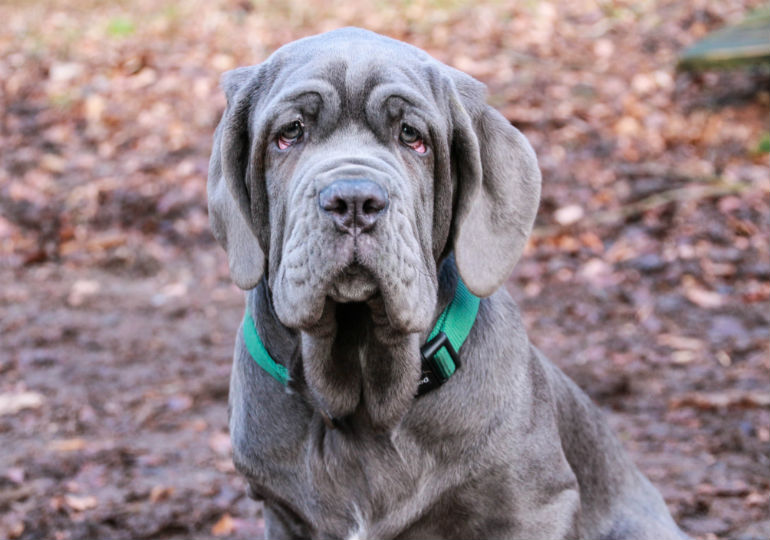 The Neapolitan Mastiff (also known as the Neo or Mastino) is a huge, heavy-boned dog with awe-inspiring features. These members of the Working Group are enormous, and the average male weighs 150 pounds, but the bigger the better. There is no other breed that looks quite like the Neo, and they can be distinguished from other mastiff breeds by their more widespread wrinkling and the pendulous lips that blend into the full dewlap (a fold of skin hanging beneath the lower jaw.) Here are some interesting facts about this astounding giant with a guarding heritage.

1. The Neo is an ancient breed, and its history can be traced back as far as 3000 B.C., through statues and other works of art, to the giant war dogs of Egypt, Asia, and Persia. By the time of Alexander the Great (356-323 B.C.), the Molossus had been created, a war dog characterized by having a wide, short muzzle and heavy dewlap. The Molossus was used to fight other animals, even those as ferocious as lions and tigers, as well as people, during times of war, and is easily recognized as the ancestor of the Neapolitan Mastiff.

2. The Romans brought home Molossus dogs as spoils of war after conquering Greece. They incorporated these dogs into their armies and continued the tradition of taking them into battle. They also used them for hunting, guarding their homes, and fighting in their arenas. Over the years, many different dog breeds descended from these Roman war dogs across different European countries. In the Neapolitan area of southern Italy, breeders spent the centuries focused on developing guard dogs for the home and estate, and they created the Neapolitan Mastiff, a breed that kept the dewlap, heavy loose skin, and giant size of the Molossus.

3. At the end of World War II, there were few representatives of this breed left alive. Several Italian breeders decided to rebuild this national treasure, using the best dogs they could find. By the 1970s, Neapolitan Mastiffs could be found in most other European countries, and they had made their way to North America.

4. The Mastino was bred to protect homes and property from unwanted intruders. The enormous head, mass of wrinkles, loose skin, and heavy jowls are certainly unique, and it has been said that the alarming appearance of the breed was developed on purpose so that its looks alone would be enough to deter any trespasser. The breed standard even describes them as bestial.

5. Neos are even scary-looking enough to play sidekick to a half-giant. In the Harry Potter books and films, Rubeus Hagrid, the gamekeeper of Hogwarts School of Witchcraft and Wizardry, shares his hut with his pet dog, Fang. Although described in the books as a boarhound, a Neapolitan Mastiff portrayed Fang in the films. Actually, including the animal actors and stand-ins, seven Neapolitan Mastiffs played Fang over the course of filming all the movies.

6. The Neapolitan Mastiff is an excellent guard dog and will heartily defend his family and home. He is a steady and loyal companion to the humans he loves. In spite of their frightening appearance, these dogs are usually docile and not aggressive under normal circumstances, and their personality is calm yet cautious. Because of their guarding heritage, it is essential to socialize them extensively.

7. Although intimidating to intruders, the situation changes with the ones they love. Neapolitans are generally good with, and protective of, children and are quite gentle and loving with their humans. They enjoy being around their people, so their majestic size may put them underfoot, but their devoted and affectionate nature makes that worth the while. Positive obedience classes will help ensure your Neapolitan Mastiff understands the rules of your household.