Is Your Dog A Star Wars Character? 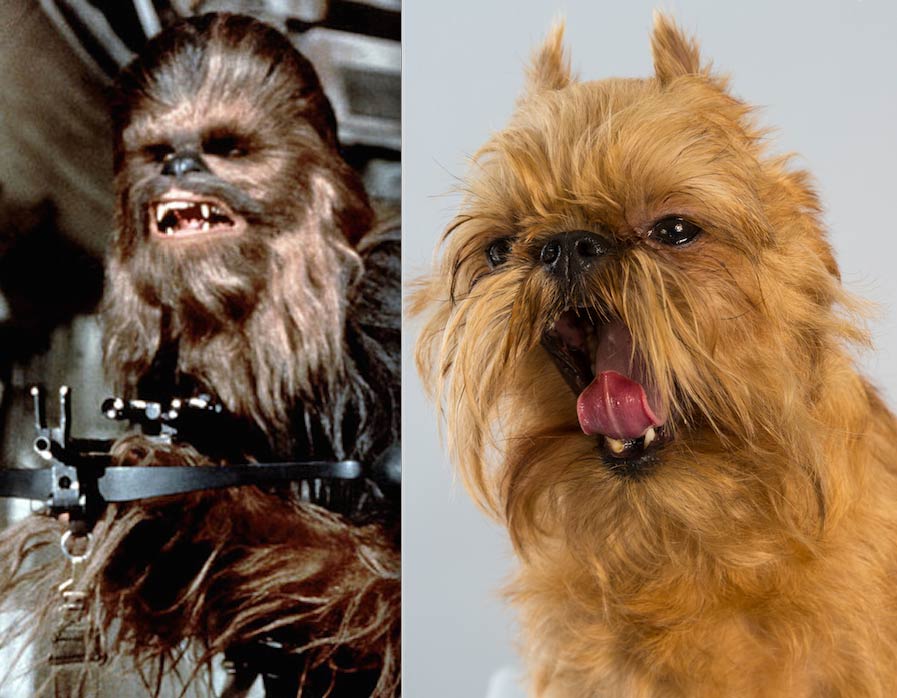 A long time ago, in a galaxy far, far away …

A young aspiring filmmaker owned a dog. She was just a pet, but this big, fuzzy friend would turn out to be one of the most influential animals, ever.

As the filmmaker, George Lucas, tells it, here’s what happened.

“I had an Alaskan Malamute when I was writing the film. A very sweet dog, she would always sit next to me when I was writing. And when I’d drive around, she’d sit in the front seat. … Having her with me all the time inspired me to give Han Solo a sidekick that was like a big, furry dog.”

Her name was Indiana, and she gave birth to one of the most beloved characters in the cultural phenomenon that is Star Wars—Chewbacca, the Wookiee. (She also gave a certain globetrotting archeologist his name in another famous film series.)

When it came time to find a human to bring the character to life, the role went to Peter Mayhew. He was a 7-foot-3-inch-tall hospital orderly from London, who had previously been in one movie. Soon after that, Mayhew was asked if he wanted to play a “large hairy beast” in a new science-fiction film. Mayhew took the role seriously, studying zoo animals to fine-tune Wookiee movements. Chewbacca’s language was developed by sound designer Ben Burtt, who says he got his inspiration from recordings of bears, lions, and badgers. Designers used yak hair for the costume.

It’s true that they created an unforgettable character, but they probably would have done just as well by sticking to the source for inspiration.

“Seriously? You needed a 7-foot 3-inch actor, a costume designer, and a yak to conjure up a large hairy otherworldly beast for your flick?” Courtesy Stephanie Lucero.

Observing just a handful of our canine companions would likely have provided everything needed to create Chewbacca (who’s name was derived from the Russian word for dog, собака.)

In fact, many dog owners believe that their four-legged pals really are Wookiees. Consider, for example:

Where it all began, the Alaskan Malamute, an ancient breed prized for the physical size and strength to haul freight across the frozen wilderness and the determination to keep going, no matter what.

We’ve lost count of how many Newfoundlands, who are famed for growing to “grizzly size,” go by the name Chewbacca.

Tibetan Mastiffs have the heft, the hair, and a huge helping of another Wookie characteristic—the urge to defend those they love, even at great risk to themselves. The breed standard specifies, “He is aloof with strangers and highly protective of his charges and his property.”

©davit85 - stock.adobe.com
Come to the bark side.

Leonbergers, with their abundant golden to red or red-brown coats and black masks, closely resemble the Wookiee color and physique. They are famous for chatting like Chewbacca.

Brussels Griffons prove that you don’t have to be huge to be Wookiees, at least in spirit. Of all the breeds, the BG’s facial structure most closely resembles that of Solo’s sidekick. But that’s not all. These Belgium-born toy dogs have a connection to another iconic Star Wars figure. Lucas says he invented the name of a band of small woodland “mammaloid bipeds”—Ewoks, who appeared in the 1983 “Return of the Jedi“—by reversing the syllables in Wookiee. And the breed does bear a striking similarity to these small creatures, and has been featured in many internet Ewok gags.

But it looks to us like there was a lot of this plucky little dog in the fearless Chewbacca, as well.

“May the Fluff be with you.”