Can Dogs See in the Dark? 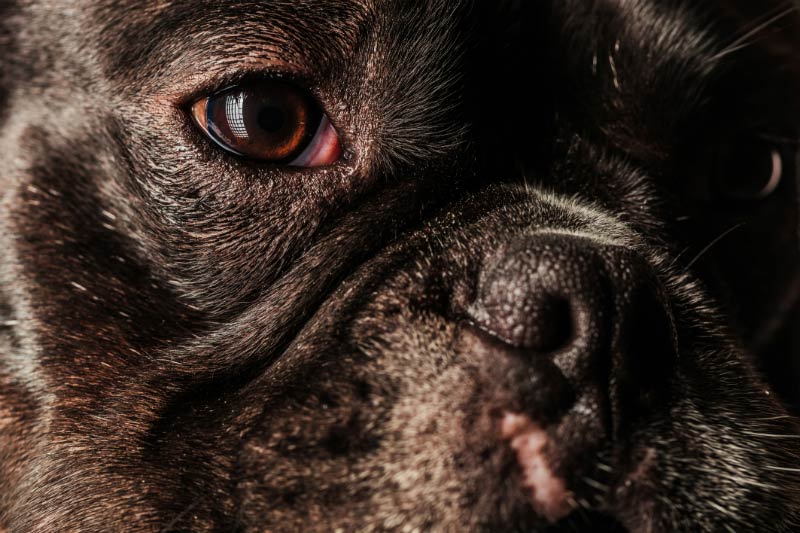 Dog owners are endlessly fascinated by the many abilities their extraordinary companions possess. We also like to compare them to ourselves: the difference between canine and human scenting ability, or dog years to human years, for example.

How well dogs see in the dark, and what they see, is one of those topics dog lovers often ask about.

According to the Canadian Veterinary Medical Association, vision is the collective summary of:

So the first place to start is to understand what the dog evolved to do—what his functions are and how they influence his vision. As natural predators, dogs are—or were—nocturnal hunters. The wild canines that our pet dogs evolved from are “crepuscular,” meaning they are active primarily at dusk and dawn. They needed to be able to spot movement in dim light in order to track and catch their dinner (or breakfast).

The Structure of the Canine Eye

To make it possible to navigate in the dark, the canine eye, like the eyes of cats and other mammals, has a larger pupil than a human’s. In the anatomical structure of the eye, the retina has light-sensitive cells, called rods, which help an animal or human see in low light. Dogs have more of these rods than we do. The retina also has cones, and they determine which colors dogs can see. The topic of color blindness of dogs is equally popular among dog lovers.

An animal’s ability to see in the dark is also influenced by Flicker Fusion Frequency (FFF) (or threshold). This is the frequency at which flickering light no longer appears to flicker (meaning it appears as a constant illumination). Generally speaking, the faster a species moves through its environment, the higher its FFF.

But a dog’s secret weapon in his ability to see in the dark is the part of the canine eye called the tapetum lucidum. The tapetum acts as a mirror within the eye, reflecting back the light that enters it, and giving the retina another opportunity to register the light.

So, dogs can see in the dark, and other low-light situations, better than humans.

Why Do Dogs' Eyes Glow in the Dark?

You’ve no doubt seen that eerie, greenish-yellow glowing look of a dog’s eyes when light hits them at night, such as from headlights or a flashlight, and in photos (caused by the camera flash). What you’re seeing comes from the tapetum.

AKC Family Dog columnist Dr. Stanley Coren says, in Psychology Today, “The shiny surface of the tapetum bounces any light that has not been caught by the photosensitive cells back up to the retina, thus giving the photoreceptors a second chance at catching the dim light entering the eye.”

But the tapetum actually does even more: it amplifies that light through a phenomenon called fluorescence.

“This not only adds to the light’s brightness but it also slightly changes the color of the light that is reflected back,” Coren says. “The color shift moves the wavelength of the light closer to that to which the rods are most sensitive to and can best detect.” And the tapetum reflects up to 130 times more light than the human eye. This is why dogs are five times more sensitive to light that we are.

Adding to dogs' special ability to see in the dark is their increased field of vision: Most dog breeds have about 250 degrees of field of vision. Compare that to ours, which is about 190 degrees.

Want a more visual answer to the question of a dog’s night vision? You can get a sense of the spectrum of vision they possess at Dog Vision, which has an image processing tool that allows users to upload a photo that can be modified to show the difference between how humans and dogs see it.

And here's a video that gives another perspective on canine vision: