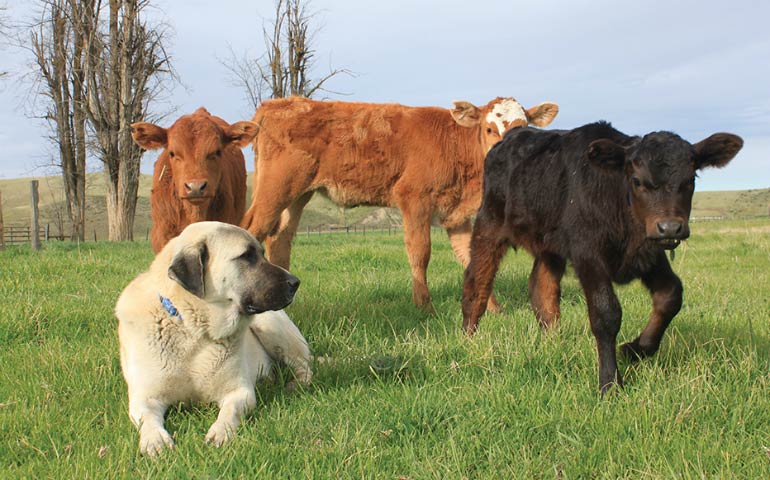 The Anatolian Shepherd Dog has been bred for millennia to do one thing: guard livestock. Unlike Australian Cattle Dogs, German Shepherd Dogs, Polish Lowland Sheepdogs, and other breeds, he doesn't herd them. That's why he is a member of the AKC's Working Group, not its Herding Group.

Gator is the living embodiment of this description, and the story below (adapted from a feature in AKC Family Dog magazine by Lisa Waddle) illustrates the breed's character even better than those words can.

A Champion on the Ranch and in the Show Ring

As a 1,500-pound cow charged her in the middle of a 500-acre field with no place to hide, Rollins Wykle ran until she was knocked down, then curled up in a ball and tried to protect her face from the cow’s head butts and sharp hooves.

The next thing she knew, Gator, her 140-pound Anatolian Shepherd, had launched himself at the cow’s head and neck, biting and snarling.

“Once the cow focused on protecting herself from Gator, I was able to run to the other side of the barbed-wire fence,” says Wykle, who with her husband, J.G. Schwarz, has been raising cattle for the past decade on a 29,000-acre ranch in Payette, Idaho. “I saw the cow catapult Gator in the air with her head, but he kept going after her. That’s when I yelled to him.”

Only then did Gator scramble under the fence to safety, diving into Wykle’s lap and licking her face. Both walked away with only bruises and scrapes.

Literally and figuratively, the scene in the cattle field was thousands of miles from the show rings where Gator, otherwise known as GCh. Carpe Diem’s Old School, won Best of Breed at the Westminster Kennel Club dog show and the AKC/Eukanuba National Championship.

Katie Emanuel, President the Anatolian Shepherd Dog Club of America, says Gator's versatility is a hallmark of the breed. “Most of our show dogs are right out of the field. The dog who just won our National Specialty in October is a full-time working dog. He only spends time on the sofa as a treat. Preserving the Anatolian's temperament is our number-one priority.”

And that’s what earned Gator another plaque to put beside his Best of Breed wins: the Top Hero Award from the Anatolian Shepherd club. The award is given to a dog who saves a person’s life or saves a person from harm “without input and acting independent of owner’s direction.”

Independent thinking is an integral aspect of the breed, given its history. Livestock guardians that originated in Turkey, Anatolian Shepherd Dogs must display physical soundness (stamina and endurance to travel long distances with the herds they protect), as well as mental soundness (often out of sight of shepherds, they must analyze dangers and decide how to handle them on their own).

Gator is one of five working dogs on Wykle’s ranch: three Anatolian Shepherds and two Border Collies. The day of the attack, Wykle and Gator entered a field to check on a water system. A group of cows and their young calves had just been moved there, and Wykle gave them a wide berth, aware of the aggression maternal instinct can trigger.

“I saw a calf completely by itself, which is unusual, so I figured I should check on it,” Wykle said. “It was fine, but one cow saw me go over to the calf and left the group and started toward me. This cow wasn’t mean, she was protecting her baby.”

Wykle faced the cow and calmly raised her hands, to make herself look bigger. But when the cow dropped its head and started striking the ground, she knew it was going to charge, so she ran. Even though Gator’s instinct and training was to guard the cattle, it doesn’t surprise Wykle that he turned on one to protect her.

“At that moment, Gator saw his mom needing help,” she says. “This is a remarkable breed, and Gator is an exceptional example.”

The breed club points out that Anatolians would rather not fight. It “upsets their charges. An Anatolian's first defensive measure is visual deterrence. They simply stand and let themselves be seen. If that doesn't do the trick, intruders are greeted with a mild, throat-clearing sort of bark that will escalate, if necessary, to a bloodcurdling warning. That final warning is NOT an idle threat. With their legendary fearlessness, prodigious strength, and cat-like agility they can drive off the largest of predators.”

Or, in Gator's case, even one of the animals he is hardwired to protect.

See an Anatolian in action — this one is guarding more than 100 goats on a farm in South Africa: