8 Fun Facts About the Borzoi, a Graceful Wolf Hunter 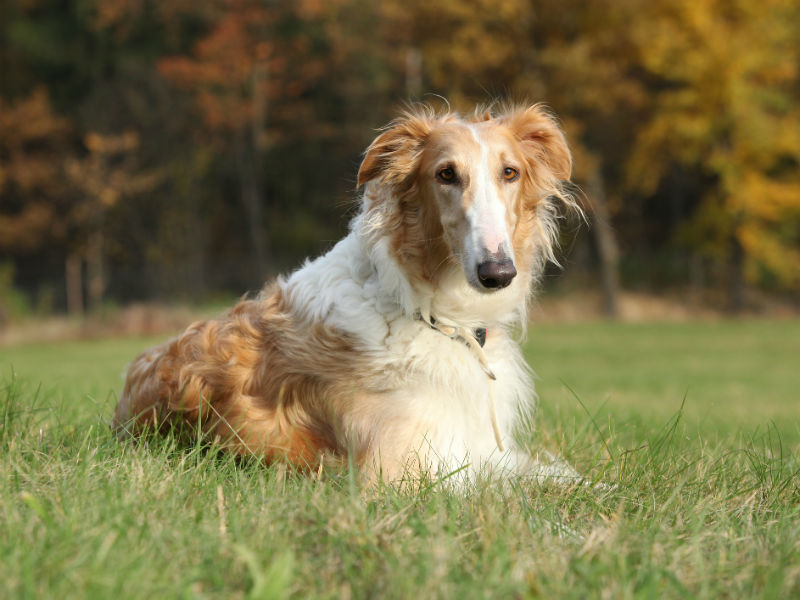 The graceful Borzoi is a very large breed with a Russian hunting heritage. The elegant flowing lines of this hound make for a beautiful dog, whether he’s resting or running. Here are 8 interesting facts about the intelligent, yet independent Borzoi.

1. The Borzoi is considered a giant breed, with adult males standing at least 28 inches and up to 32 inches high at the withers (the top of the shoulder), and weighing between 75 and 105 pounds. Females, being slightly shorter and lighter than males, are more feminine and refined. For such a large dog, Borzoi eat a relatively small amount, although puppies will eat more than adults because of their rapid growth.

2. The Borzoi is a member of the Hound Group and a type of sighthound. That means they hunt using their eyes to find and chase prey. This is different from scenthounds like Beagles and Basset Hounds that use their noses to locate and follow the scent of prey. Although they are sighthounds, Borzoi can be taught to detect and follow smells, so consider tracking trials as an activity to share with your dog.

3. Originally, Borzoi were used to hunt running game, such as wolves, foxes, and hare, over relatively open ground. They had to depend on their speed, agility, and endurance to successfully catch their prey. The breed originated in Russia and has a noble heritage, as it was associated with the Russian aristocracy. In fact, the Borzoi was named for the Russian word for “swift.”

4. Lure coursing is a particularly suitable dog sport for Borzoi, as it was created to allow sighthounds to compete in a simulated hunting situation. The course consists of a zigzag path of at least 500 yards. A motor with a line-and-pulley system pulls a plastic lure, usually made of strips of white garbage bags, and the dogs are released to run after it. Other activities your Borzoi might enjoy include agility, rally, or obedience trials.

5. The Borzoi’s coat is long and silky, and it can be flat, wavy, or rather curly. Any color or combination of colors is allowed, according to the breed standard. Like most longhaired dogs, the Borzoi sheds. Intact females will shed after every heat cycle, and both males and females who are spayed will shed annually. Brushing every day or so will keep loose hair under control. Luckily, mud and dirt don’t stick to the silky fur, so bathing is not needed as often as might be expected. However, the hair between the paw pads needs to be trimmed regularly.

6. Keeping in mind the Borzoi’s hunting heritage, this breed needs regular exercise to keep him in tip-top condition. The best exercise is running free for one-half hour or more a day. However, this needs to be in a fenced-in area. Their instinct to chase is intense, so they should not be let off leash anywhere that isn’t secure.

7. Borzoi can be very affectionate with their families. When they are raised with children, most will become good companions. However, they are not tolerant of rough treatment, so it’s essential that children are taught proper and respectful behavior toward their dog. In addition, the large size of the Borzoi can be cause for concern around very young children because they could be easily knocked over, even accidentally. As with any dog, be sure to supervise any small children around your Borzoi.

8. This is a smart breed, but the independent and sometimes stubborn temperament of the Borzoi can make training a challenge. Being consistent and patient will lead to success. In addition, the more fun you make your training sessions, the more your Borzoi will look forward to them. Positive training techniques work best for this breed. Don’t forget your Borzoi’s heritage when training. Consider using his love of running and chasing a moving object to reinforce good behavior.