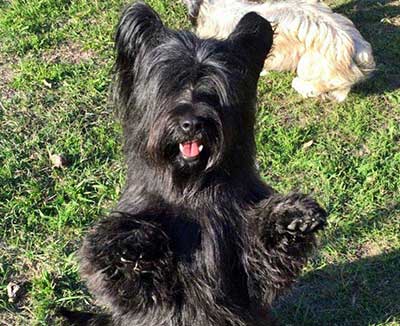 Skye Terriers are a classic breed that were in their prime during Victorian England. Brave and fiercely loyal, they make great companions. Here are seven interesting facts you probably didn't know about Skye Terriers:

1. Skye Terriers were bred by farmers to ward off pests.

Skye Terriers are known for their elegant appearance, but they were actually bred as working dogs, which had to be extremely brave and tough. Farmers bred Skye Terriers and trained them to protect their farms from pests like foxes, badgers, and otters—animals. The Skye's long, thick coat made him appear larger and more threatening, and protected him from bites.

2. The Breed is older than most Terrier breeds.

Many Terrier breeds acquired their present appearance at some point within the last century. However, the Skye Terrier has had the same appearance for at least the last four centuries, even if it was not always called by the same name. As far back as the breed can be traced, it seems to have originated in the northwestern islands of Scotland. The name Skye was the name of the leader of those islands.

3. The breed was a famous artistic muse.

Sir Edwin Landseer, a painter and sculpture known best for his lion sculptures in Trafalgar Square, produced many paintings of Skye Terriers. Landseer's artwork helped to popularize the breed in every English-speaking country during the Victorian Era.

4. Skyes were a necessary companion for royals.

Queen Victoria's fondness for Skye Terriers was a major factor in the dogs' increased popularity among the aristocracy, and they were even accepted in the royal court. During the Victorian Era, duchesses apparently would be ashamed to be seen in the park without their elegant Skye Terriers.

5. Scotland's most devoted dog in history was a Skye Terrier.

In the 1850s, a night watchman in Edinburgh named John Gray adopted a Skye Terrier named Bobby to keep him company during the nights. When Gray died of tuberculosis, Bobby refused to leave his master's grave. The graveyard keeper tried to evict Bobby, but was unsuccessful, and so he built a makeshift shelter for Bobby next to the grave. For 14 years, Bobby never left his master's grave except to eat. When he died, a statue of Bobby was erected near the graveyard.

6. Mary Queen of Scots' Skye Terrier caused quite a scare.

When Mary Queen of Scots was executed in 1587, the crowd was horrified to see her body move after the final blow of the ax. It turned out that her dog, who stayed with her the whole time she was in prison, had hidden underneath her gown for the entire ordeal. Many believe her dog was a Skye Terrier, though some claim it was a Maltese.

7. Skyes are an “endangered” dog breed.

Though the Skye Terrier was immensely popular in the Victorian Era, their numbers have declined dramatically. Just 42 were registered with the UK Kennel Club in 2012. Even though their numbers are small, Skyes continue to be entered in shows as formidable competitors. As recently as 2014, a Skye Terrier named Charlie won Best In Show at the AKC/Eukanuba National Championship.