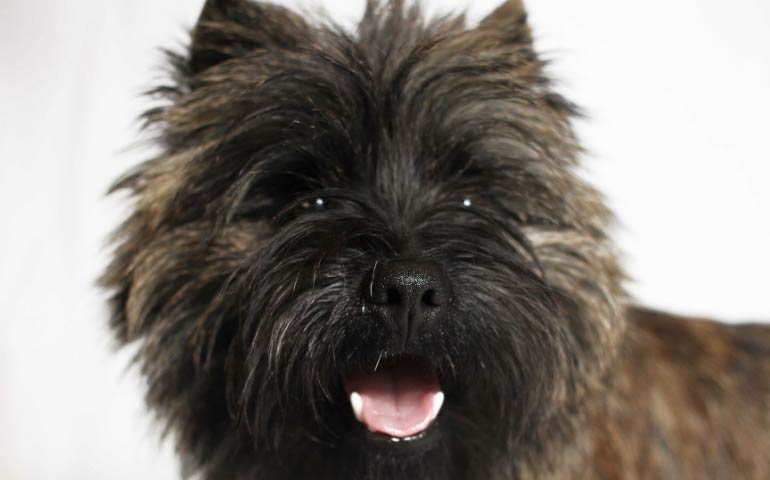 The Cairn Terrier is one of several related breeds that emerged on the wild, windswept British Isle of Skye and in the Scottish Highlands as early as the 1600s. Originally used for the unglamorous job of clearing vermin from farms, the best-known Cairn ever was a movie star, playing the role of the mischievous canine sidekick in the timeless Hollywood classic, “The Wizard of Oz. Many people know Toto, but we bet there’s a lot about this breed that will come as a surprise, even to die-hard fans of the Emerald City.

Nothing's refined about them and that is a point of pride among Cairn people. “I call them scruffy little Toto dogs,” notes a longtime fancier. One 1937 book put it this way: “The Cairn is a cave-dog—an innate barbarian, truculent, fearless.”

2. They are named after a pile of rocks.

The word cairn refers to a stack of stones, formed either naturally or by human hands, that are used as road markers and memorials. These are prime real estate for mice, rats, and other small vermin, and the dogs were developed to go in and flush them out.

Ideally they should weigh no more than 13 or 14 pounds. This was essential for their original purpose, which was to wriggle into burrows and rocky passages after critters.

4. And they have unusual feet.

They tend to be southpaws, but that’s not the only odd Cairn foot fact. Their front paws are well-padded and larger than their rear ones, traits that gave them an advantage when digging in their pursuit of rodents. For the average pet owner today that means that you’d better protect, or give up on, your garden. Cairns just gotta dig.

5. The Cairn’s stick-to-itiveness is legendary.

They do not give up. There is a story of a working Cairn in Britain whose job was to help clear otters from seaside rock formations. The terrier grabbed the otter and held tight even after the animal plunged into the sea. His owner had to dive underwater to rescue his dog and found the little terrier, with his teeth still in the otter.

6. … As is their assertiveness.

Cairn people have a saying, “If you give a Cairn an inch, he won’t take a mile, he’ll take 100 miles.” They have the potential to be unbelievably sweet, loving, fun companions, but they require solid training and well-established boundaries, notes the Cairn Terrier Club of America.

7. The movie star who played Toto was dumped by her first owner.

L. Frank Baum, author of the Wizard of Oz, did not specify Toto’s breed, and heated debate rages to this day over whether the dog was a Cairn or a Yorkshire Terrier. When it came to casting the character for the movie, studio executives were open to any breed. It just so happened that the right actor turned out to be a Cairn, who, like Toto, had gotten herself in big trouble. She was a puppy named Terry who had been purchased as a pet. When her owners could not convey the concept of potty training to her, they dropped the pup off at a trainer and never returned. He happened to be Carl Spitz, of the Hollywood Dog Training School, who prepared canine actors for movies, wrote Willard Carroll in his book on the life of the four-legged icon, I, Toto

. The rest is history.