Meet the Faithful and Gentle Briard—a Heart Wrapped in Fur 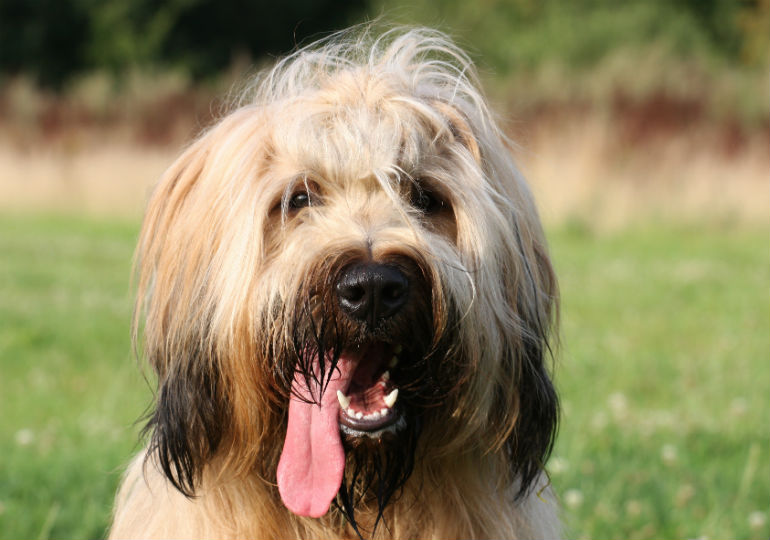 The loyal Briard, also known as the “Chien Berger de Brie,” is a strong and powerful sheepherding dog, originally from France. Fans of the breed call the dynamic and alert Briard “a heart wrapped in fur.” Here are some interesting facts about this member of the Herding Group that will have you calling yourself a fan, too.

The Briard dates to the eighth century, when he was developed to herd and guard flocks of sheep. He was an all-around farm dog, aiding the shepherd in all of his tasks, but also a family dog that was required to watch over his humans and their household when he went home for the evening. In other areas of France, the Briard worked flocks in mountainous summer pastures, where he would move the sheep during the day and guard them and the shepherd at night.

Large Briard-like dogs are depicted on 8th century tapestries created during Charlemagne's reign (742-814). But he’s not the only famous person from history to have been associated with these fearless, yet gentle dogs. Napoleon also owned members of the breed, and Thomas Jefferson imported several Briards to look after his extensive flocks.

The French used the Briard during both world wars, and the breed was once the official dog of the French army. These dogs had the dangerous job of carrying supplies to troops on the front lines of battle. They were also used as sentry dogs because of their reputation for extremely sensitive hearing. In addition, the medical corps employed Briards to search for wounded soldiers, and they were renowned for their skill in distinguishing between those men who still had a chance and those who were beyond help. There were so many Briards lost during the wars, that they are still relatively uncommon today.

Male Briards should stand between 23 and 27 inches at the top of the shoulder, and females should be between 22 and 25.5 inches. Despite their size, they are known to be almost cat-like in their movements, gliding over the ground as if they aren’t even touching it. One of the breed’s unique features are the double dewclaws on the rear legs.

The Briard has a double coat, with the undercoat being fine and tight on the body. The outer coat is coarse, falling in long gentle waves. It’s also dry and will make a dry rasping sound when rubbed between your fingers. You will need to groom your Briard for at least two hours a week to keep him comfortable and looking his best. The permitted coat colors are black, various shades of gray, and various shades of tawny.

This is an intelligent breed that can understand a wide range of cues. It’s not uncommon for a Briard to know more than 200 words. They are also fast learners with wonderful memories and a desire to please their human family. But with a herding heritage that required Briards to make independent decisions, don’t be surprised by the occasional stubborn moment when your Briard disagrees with your opinion. The best way to keep your dog seeing eye-to-eye with you is with consistency, a gentle approach, and kind praise.