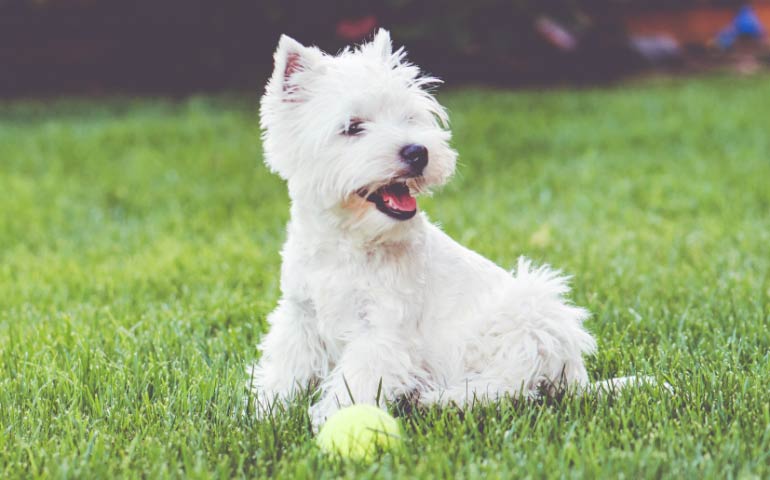 The West Highland White Terrier originated long ago in the Scottish Highlands, where the breed was prized as a tough, efficient hunter of vermin and small game in the rugged landscape. He is closely related to several other terrier breeds from the region, including the Scottish Terrier, Cairn Terrier, Skye Terrier, and Dandie Dinmont Terrier.

True to their hunting background, Westies are feisty, energetic, and determined. They are also very devoted to their people. The breed’s sterling qualities make for a charming companion—though in many ways they can be challenging to own. But to their fans, there’s nothing better than this lively, handsome canine who's just bursting with big personality in a small package.

Those who’ve owned a Westie are well familiar with the breed’s quirks and personality traits—and below are five of the most defining ones.

1. Westies are full of themselves.

A Westie pops his head out of a burrow while competing in an earthdog event.

Who can resist these friendly, lively little dogs? The white-whiskered face with black nose and dark-brown eyes smiles back at everyone they meet. They're cocky and confident. The breed standard puts it perfectly, noting that Westies have “no small amount of self esteem.”

Although Westies of today may not be called upon to do much hunting, the breed’s instinct to go after prey is very deeply ingrained. Don’t be surprised if your Westie wants to go after every squirrel he sees or pulls on the lead when he sees a strange cat (although he can learn to live happily with felines he’s raised with).

3. If they had it their way, Westies would always be doing something or going somewhere.

Westies are very energetic and need plenty of exercise. Having been developed to hunt over rocky, difficult terrain for long hours, Westies are hard-wired for high energy and extended activity. If they’re bored or not getting enough exercise, all that pent-up need for action can be expressed in ways such as barking, digging, or other inventive but perhaps-not-desirable pursuits.

So it’s great all around when a Westie can be kept busy with a fun, active “job” to do, as in doing rally or agility, or even working out those hunting skills he was bred for—such as “going to ground” after (completely unharmed) rodents in earthdog or Barn Hunt events. And in the midst of keeping your Westie happy and busy, you might find a new hobby that you really enjoy as well.

4. Westies tend to get restless if they’re still for very long.

The corollary to the need for exercise mentioned above is that since “lying around lazily” is not usually tops on a Westie’s agenda, they don’t tend to make the best lapdogs. But although a Westie might not be a great lap-sitter, he’s highly sociable and people-oriented and makes a friendly and admired companion in a variety of settings, and a deeply devoted pet.

5. Westies are very smart—and they know it.

The breed standard describes the Westie’s expression as “piercing, inquisitive, pert.” In that bright and perky demeanor is a keen intelligence. Along with the Westie’s smarts is a fierce streak of independence, which means he can be clever at figuring out how to not do what you’re wanting him to. So it’s best to work on a Westie’s training and socialization right from the start, nipping in the bud any bad habits his cleverness might get him into. It’s recommended to enroll your Westie in puppy training classes as soon as your vet gives the OK, and—a must—be sure he gets many positive (non-scary) socialization experiences early on.

Note that training a terrier can require a lot of patience and diligence. Two books that many terrier owners have found to be helpful are Terrier-Centric Dog Training: From Tenacious to Tremendous, by Dawn Antoniak-Mitchell, and When Pigs Fly!: Training Success With Impossible Dogs, by Jane Killion.

Raised right and nurtured by owners who understand the breed’s character and inborn traits, a Westie is a canine with stellar qualities and irresistible appeal.

Also see: Why Does My Westie Do That?