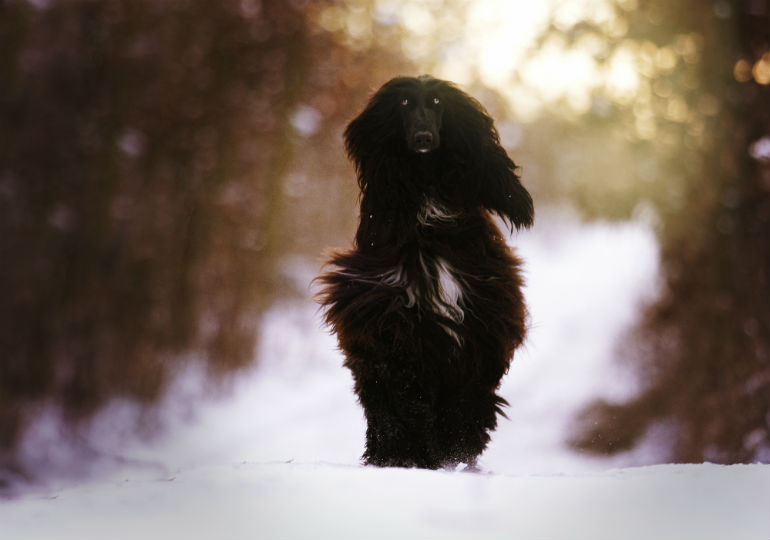 When you fall in love, three things may attract you: looks, temperament, and interests. If you're wise, you know that there may be some qualities in the loved one that you don't much like, so you learn to take the good with the… interesting. Owners of the aristocratic Afghan Hound know exactly what we mean. An Afghan Hound can be a handful, but like anything worth having, he's worth the effort. Whether you're a longtime fan of the breed or considering living with your very first Afghan Hound, here are some facts about the breed you'll want to know.

Those looks! A long, silky, flowing coat and topknot, his prominent hips, and very large feet make for an elegant and regal dog. But this isn't just for show. The long, flowing coat protected the breed from the harsh climate of his homeland. In fact, this type of coat is often found on animals that are native to mountainous areas and high altitudes. The huge paw pads protected his feet, acting as shock absorbers on unforgiving terrain. Under all of that beauty is a powerful hound that can endure long hours on the hunt.

The beauty doesn't come easy, however. Afghan Hounds need regular grooming, including frequent baths and brushing. Be prepared to either spend money on a groomer or spend many bonding hours bathing, brushing, and grooming your dog.

So much personality and so many contradictions! On the one hand, the Afghan Hound is loving and deeply attached to his people. With those he loves, he can be an endearing, humorous, and even silly companion. On the other hand, the breed is known for being independent, regal, and and even aloof. Given the chance, the Afghan will be the lord of the manor and take his true place as royalty.

Training is a challenge. These are intelligent working dogs. Being such independent freethinkers was an advantage in their role as hunters expected to work on their own. The challenge is to find creative and positive training methods that will pique and hold your dog's interest.

The Afghan Hound is no couch potato. As magnificent as he looks lying decoratively on the sofa, this is a breed that needs a great deal of exercise. He's a working sighthound with an unquenchable prey drive. And he's lightening fast. He needs plenty of room to run at full speed, but always in a fenced-in area. With that speed and prey drive, the Afghan Hound can be miles away in the blink of an eye. Speaking of fences, did we mention that Afghan Hounds are also jumpers? Fencing should be at least six feet high to keep him safely contained.

For walks, you'll want to use a strong leash and a slip or martingale lead. Although appearing dignified and elegant, Afghans are at heart forceful prey-driven hunters, intent on going where they want to go.

Afghan Hounds have long been cultural icons. This regal dog has been famous throughout the ages and in recent culture. Zeppo Marx, of Marx Brothers fame, was one of the very first Americans to recognize the breed's regal beauty, and he brought the Afghan Hound to the United States in 1926.

Pablo Picasso owned not only one, but at least two Afghan Hounds, and featured the breed in his painting, “Femme au chien.” We're not sure the Afghan Hound has anything to do with it, but the painting sold for almost $11 million in 2012.

On a more lowbrow note, Barbie, the doll beloved by millions of little girls, has a pet Afghan Hound named Beauty.

If you're willing to put in the time and effort, and if you know that this magnificent dog is more than just a showpiece, an Afghan Hound will reward you by being a sweet, deeply loving, and highly entertaining canine member of the family.