Greyhounds: Faster Than a Speeding Bullet, Sweeter Than Honey 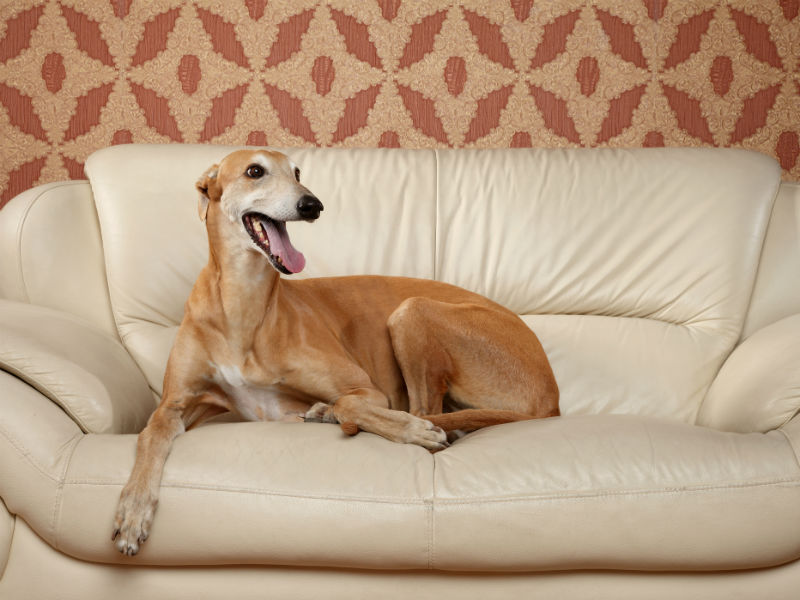 Here are the first three things you need to know about Greyhounds:

The more you know about the breed, the easier it is to appreciate their speed and intensity. These five traits show you what makes a Greyhound a Greyhound.

1. The Greyhound is a perfect example of form following function. This ancient breed was used for thousands of years to chase (course) game for long distances over a variety of terrains. He is sleek, powerful, and well-muscled. He’s got a long, aerodynamic skull, and the pads on his feet act as shock absorbers. He also has the ability to focus intensely on his prey. The Greyhound is built to do exactly what he does.

2. The Greyhound is a sighthound, which means that he chases game based on his sight instead of by scent. He is known for his agility, endurance, and extraordinary speed. In fact, Greyhounds have been clocked at more than 35 miles per hour and are the fastest breed of dog. Naturally, Greyhounds excel at lure coursing. Their natural instincts kick in, and they’re as enthusiastic chasing an artificial lure as they are chasing live prey.

3. An important attribute for sighthounds like Greyhounds is the ability to hunt independently. He may be miles ahead of the hunter and must be able to course without interruption. The flip side of this is that training can be a challenge; that incredible prey drive will often take precedent over whatever you’re trying to teach him. Be patient and consistent, and try to maintain a sense of humor.

4. There is an entirely different side to this magnificent breed. When they’re not hunting or running for the sheer joy of it, Greyhounds are gentle and docile. They’re social and can be enormously charming. There’s something almost catlike in their grace, elegance, and touch of aloofness. Your Greyhound is more likely to stretch out on the sofa and watch you go about your day than he is to climb up into your lap. However, let him think you’re considering venturing outdoors, and he’ll be right there with you, ready to go chase something.

5. Despite their athleticism and speed, the Greyhound can spend a lot of time lounging around or napping. He doesn’t need to be in constant motion like terriers, for example. It’s as if he’s saving up his energy for the next great run.

Lovers of the breed appreciate all of these traits and know that treated with kindness and care, the Greyhound will be the sweetest of lifelong companions.